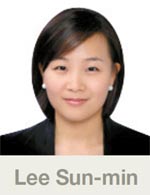 Perched on the edge of the deck of the most famous ship ever created, a woman stretches her arms out to her sides as her beau holds her from behind in the ultimate symbol of freedom and romantic love.

Oddly enough, this scene from the movie “Titanic” (1997) is recreated in the opening scene of the musical “Monte Cristo,” now playing at Chungmu Art Hall in central Seoul.

Just as the two lovebirds in “Titanic” are destined for one another but kept apart by the cruel reality of circumstance, so too are Edmond Dantes and his fiancee Mercedes, the central couple in the musical that is based on Alexandre Dumas’ 1844 novel “The Count of Monte Cristo.”

As a whole, the plot of the musical is a simplified version of the novel, but that doesn’t diminish its power.

The musical follows the story of Edmond, who was selected to be a captain of a fishing vessel, is suddenly brought to court for being a traitor on the eve of his wedding to his fiancee Mercedes. 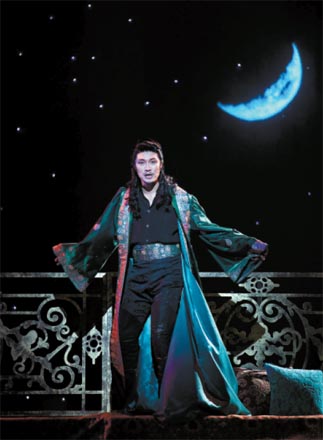 It is later revealed that Fernand, who lusts after Mercedes, Danglars, who is jealous of Edmond’s rise to captain and Villefort, who is scared to lose his job because of a letter he asked Edmond to deliver, conspired to have Edmond imprisoned for life.

Up to the point in the story when Edmond is imprisoned, the musical unfolds with a serious tone that is emphasized by the song “A Story Told,” sung by the three conspirators.

Naturally you expect the story to get much in such a grim setting more serious when the imprisoned Edmond meets a priest named Faria who gives him an education in everything from literature to sword fighting.

But this part of the musical was quite funny, with the wizened character Faria using slapstick and verbal humor to give the audience a bit of comic relief.

When Faria appears in Edmond’s cell by accident through an escape tunnel they have been digging together, Edmond gives him a friendly tap on the behind that Faria misinterprets as a romantic overture, telling him, “I don’t feel that way about you.” The scene is a good transition from the story of Edmond’s education to his escape and transformation into the mysterious and wealthy Count of Monte Cristo.

Faria returns to the story later, his words echoing in Edmond’s head as he is about to execute his revenge on the three men who conspired to put him in prison.

As in the novel, the musical ends happily, with good prevailing over evil as the two lovers are reunited.

The musical premiered in Switzerland in 2009 and received rave reviews when it was first recreated for Korean audiences last year.

It features music by Frank Wildhorn, who also created the music for “Jekyll and Hyde” and “Tears of Heaven,” both of which are now playing in Korea as well.

*“Monte Cristo” runs through April 24 at Chungmu Art Hall. Performances are at 8 p.m. on Mondays, Wednesdays, Thursdays and Fridays, and at 3 and 7 p.m. on Saturdays, Sundays and holidays.