Opera company deals with the devil in ‘Faust’

Opera company deals with the devil in ‘Faust’ 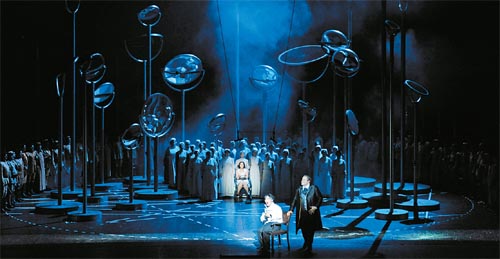 
Many of us long to be young again. But is it worth the price of your soul?

This is the basic conundrum faced by the protagonist in French composer Charles-Francois Gounod’s “Faust,” which has seen many incarnations since it first appeared in print in 16th century Germany.

This weekend, opera lovers will have a chance to contemplate the question when a production of Gounod’s “Faust” (1818-1893) is presented by the Korea National Opera at the Seoul Arts Center’s Opera Theater.

The production is based on Johann Wolfgang von Goethe’s play of the same name about a man who sells his soul to the devil in exchange for youth and pleasure.

The story follows Faust, a scholar steeped in theology, philosophy, law and medicine, who has an unquenchable thirst for knowledge but believes that his studies have come to nothing while also denying him the opportunity to find love. When he reaches out for advice, he is visited by the devil, who offers to make him a king on earth if Faust later becomes the devil’s servant in hell.

The cast stars two opera veterans who will be appearing in Korea for the first time. Both stars were in Seoul to promote the show at a press conference at the Seoul Foreign Correspondents’ Club on Tuesday. 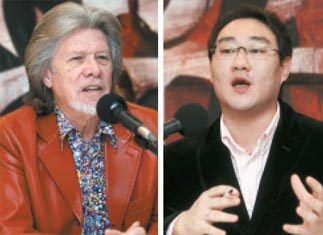 Samuel Ramey, a legendary American operatic bass, stars as the devil Mephistopheles, a role he has played in 200 of the 300 operas in which he has appeared throughout his career.

“I’ve spent three-quarters of my career singing the part of the devil. I spend much of my time being evil,” Ramey said.

The production also stars tenor Woo-kyung Kim, the first Korean to win first place at Operalia, The World Opera Competition, which was founded by renowned tenor Placido Domingo in 2004. Kim was also the first Korean to play Alfredo in “La Traviata” at the New York Metropolitan Opera in 2006.

“It’s been 11 years since I left my home country, so I’ve been very careful about choosing the piece for my Korean debut,” Kim said. “And I’m very honored that the Korea National Opera wanted me to play the part in this production.”

Lee So-young, the artistic director of the Korea National Opera, said that after seeing Kim perform as Faust in Bordeaux, France, in 2006, she decided that she would cast him in her own version of “Faust.”

This is the second in the Korea National Opera’s “Goethe’s Faust” series. The first was a production of Italian composer Arrigo Boito’s “Mefistofele,” which was presented here last October. The work was the only opera completed by Boito, who is better known as Verdi’s librettist.

Although both productions are based on Goethe’s play, the productions differ from one another in that Boito’s version is told from the perspective of the devil and Gounod’s centers on Faust.

Ramey, who has recreated the role of the devil in many different productions, has a unique take on the two versions of the legendary character.

“Gounod’s devil is not as evil as Boito’s. He’s such a multifaceted character, very charming, fun, loving and seductive. It’s great fun to play the part,” Ramey said.