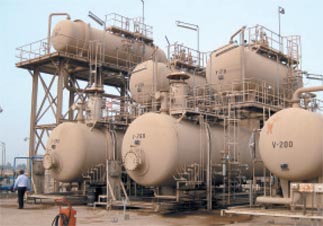 The Zubair oil field in Iraq was developed by Kogas Consortium and will produce 1,200,000 barrels a day in six years.

Korea Gas Corporation, which promotes itself as a “global energy company that works together with the customers,” has set up its long-term vision and management strategy and is promoting its business based on this vision. Kogas is currently carrying out a large scale plumbing-network construction project that started in July 2009, with the aim of completing it in 2013. The plumbing network is 1,040 kilometers (646 miles) long. Kogas also plans to construct an LNG terminal in Samcheok, Gangwon, in addition to the current LNG Terminals in Pyeongtaek, Incheon and Tongyeong. The goal is to stabilize the natural gas supply.

The company also seeks to improve its global reach by securing human resources, key technology and capital. And last of all, by elevating its management system, Kogas plans to stabilize management and operate the organization based on output and results.

The Zubair and Badra oil projects in Iraq were two major overseas projects and in case of the Zubair oil field, Kogas is expected to recover part of its investment some time in the early part of this year.

Kogas has also made inroads to unconventional gas development businesses in Canada with shale gas and tight gas. In February 2010, Kogas purchased 50 percent in shares of three mines producing shale gas from Encana, a Canadian company that has produced shale and tight gas at the Jackpine Mine and others.

In January 2011, Kogas decided to purchase a 20 percent stake in Umiak Discovery, located in the northern part of Canada. Kogas became the first Korean company to enter far north for resource development.

Kogas is currently importing natural gas from overseas in LNG form. It then evaporates the gas and supplies it to 26 power plants and 30 local gas companies in Korea. Kogas was recently named the fourth most admired company in the world in the energy industry by Fortune. And among Korean companies, it came in second and was the only public company chosen.