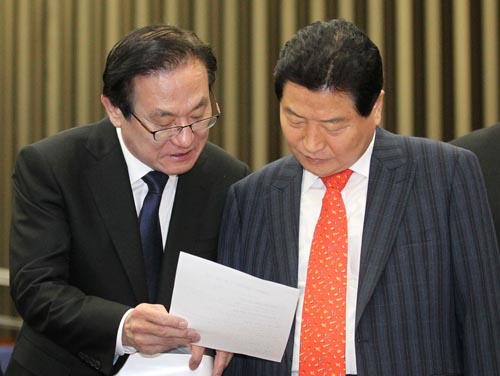 
A National Assembly committee said yesterday that it will push for a law revision that would free police from the prosecution’s supervision in criminal investigations and increase oversight over corruption of prosecutors, judges and prosecution investigators.

The committee also proposes abolishing the powerful Central Investigation Department of the Supreme Prosecutors’ Office, which has often raised questions about the prosecution’s political neutrality.

An independent investigative agency would instead be set up to handle corruption and power abuses by judges, prosecutors and other cases commissioned by the National Assembly.

In addition, the committee agreed to increase the number of Supreme Court justices from the current 14 to 20 to reduce their heavy workloads.

These and other legislation plans were agreed upon by a six-member subcommittee of the special legislative committee on judicial reforms, Representative Joo Sung-young, a key member of the committee from the ruling Grand National Party (GNP), told reporters.

Under the current criminal procedural law, the prosecution is the authoritative body in criminal investigations and entitled to supervise police officials even though police independently handle most of the minor criminal cases.

Police want to have their own criminal investigative power, albeit on limited cases, but prosecutors refuse to accept the demand, citing police officers’ lack of professional qualifications.

Concerning the independent investigative agency, Joo said it would belong to the prosecutors’ office, but would have separate personnel and investigative power.

“We hope this system will provide a fundamental solution to problems with the existing special counsel system that has been under mounting criticism for wasting taxpayers’ money,” Joo said.

The top prosecutor’s office, however, strongly resisted major issues of the reform plan.

“We express serious concern over the revised bill over whether the reform plan is in the interests of the people,” prosecutors’ office spokesman Han Chan-shik said a statement. “Although the decision to reform the criminal justice system should be made after collecting opinions from various stakeholders in an open forum, this reform proposal did not undergo such a process, which is regrettable.”

The reform plans, if endorsed in a plenary meeting of the committee, will be written into bills by April 10, he said. The committee aims to pass the plans through the parliament by April 30, according to the lawmaker.