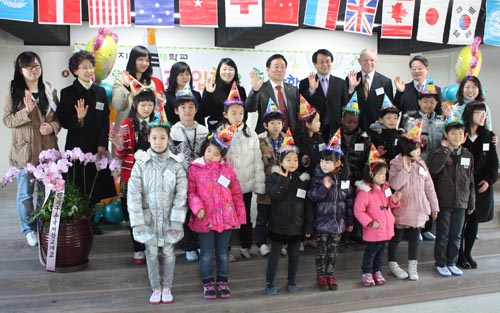 
For the first time in Seoul, a private elementary school for children from multiethnic families was opened for 24 students from underprivileged backgrounds. Tuition and meals are free.

The goal of the School of Global Sarang(www.g4w.net) in Oryu-dong, western Seoul, which opened its doors on March 2, is to exploit the potential of biracial children as assets for a more multicultural Korea.

“There are currently more than 1.3 million migrants in Korea, but their children are neglected and live in appalling conditions, not enjoying their right to be educated,” Kim Hae-sung, the founder of the school, said. “Protecting these children and educating them can lead Korea to a more prosperous future, and that’s why I founded the school.”

“Although we have only 24 students from first to fourth grades now, we will increase the total number of students to 90 from first to sixth grades in the future,” a school official said.

All of the students are living in underprivileged circumstances or suffering problems in Korea. Some couldn’t adjust to ordinary Korean public schools; others moved to Korea from their mother’s home country; and some are living with foreign mothers who have left their Korean husbands.

Previously, there were only two schools for children of multiethnic families: Saenal School in Gwangju in the South Jeolla area and Asia Community School in Busan. All three are private alternative schools without public funding or control.

“Some Korean parents thought our school was an international school where Korean students pay expensive tuition fees and learn English with foreign classmates,” Kim Bo-gyeong, an official for the school, said. “But we have a totally different system and purpose. We teach biracial children from low-income families and only a few Korean students.” A few children from underprivileged Korean families also attend.

With a six-story schoolhouse and a playground located on a nearby hill, the school has 4 Korean homeroom teachers, and 6 first-grade students, 5 in the second grade, 3 in the third, and 8 in the fourth.

From 8:20 a.m. to noon, students learn the official curriculum of regular elementary schools, such as Korean, math, science, history and P.E. In the afternoon, they learn Korean, English and the mother tongue of their foreign mothers. There are also classes on international cultures and career classes. Thirteen volunteers teach the extra classes for two or three hours a week. Classes finish at 4:00 p.m., and homeroom teachers take the students home on a school bus every day.

The school is starting to accept students for grades five and six. After graduating, they will go onto regular middle schools.

The school offers everything for free: tuition, meals, school bus service, extracurricular activities and even field trips. The school runs on donations from charity organizations, philanthropists and companies.

“We have received 2 billion won [$1.78 million] in donations and 1 billion of it was donated anonymously,” founder Kim said. “Lots of companies donated: Daewoo Securities, Posco, Bonjuk, Hyundai, and so on. A female singer, Ha Chun-ha, held a concert for children from multiethnic families and donated all the benefits to us, about 100 million won. And a church for overseas Koreans in China pays the rent on this building.”

Ha Mi-ryang, homeroom teacher for the fourth grade, says her eight students, most of whom transferred from regular elementary schools, have changed in the brief week that they’ve been at the school. They have mothers from China, the Philippines, Bangladesh and Ghana. (One student has two Korean parents.)

“When I met them for the first time, some students who have different skin colors were trying to hide their faces with the collars of their coats or with their baseball caps,” Ha said. “I told them all: ‘You have such pretty faces so you don’t need to hide them.’ After that, they changed a lot, and went from being withered and dispirited to active and bright.”

The Korean students from underprivileged families have no problem getting along with the mixed-raced children, Ha said.

“Here, Korean and biracial students are really mingling with each other, which surprised me a lot, and sometimes they search Korean dictionaries together to communicate with each other,” Ha said. “I guess children here are overcoming language and cultural barriers, and no one points to another because of his skin color.”

An eight-year-old second-grader whose mother is Philippine said she prefers her new school to the regular elementary school she used to attend.

“In my old school, [Korean] classmates hit me for no reason,” the girl said. “But here, no one hits me and everyone is so nice to me.”

Founder Kim said the school needs more donations because it will be approved as private alternative school by the local education office, and the office will give about 50 million won per year. But Kim said the annual budget will be roughly 1 billion won.

In Gwangju, Saenal School, a free school for biracial children from underprivileged families, is suffering from financial problems because of a shortfall in donations. In Busan, Asiaschool has similar problems.

Asked how he will overcome financial problems, Kim said, “Funded by donations only, I have managed a hospital, called Clinic for Migrants in Korea, for seven years, providing free medical services for foreign workers and migrant women. I think my experience in managing the hospital will be a big help in running the school.”