A deceased actress’ ‘message from hell’

A deceased actress’ ‘message from hell’ 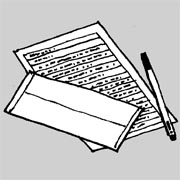 Poet Yu Chi-hwan’s “Happiness” begins at a post office. “Love to me is happier/Than to be loved/Again today I write/At the post office window/That opens onto the emerald sky.”

A love letter is filled with yearning. In “Waiting for a Letter Again,” Poet Jeong Seung-ho wrote, “Today, waiting was happier for me/ than loving you.”

Poet Hwang Dong-gyu’s “Happy Letter” reads: “The reason why I truly love you is because a letter transformed my love into an infinitely prolonged expectancy.”

A letter from prison or exile is filled with desperate love. The 14 Epistles are the letters of Paul the Apostle that became the basis of the New Testament, and four of them, Ephesians, Philippians, Colossians and Philemon, are letters from prison. Paul defined the doctrines of Christianity.

Former President Kim Dae-jung wrote letters when he was in Cheongju Prison. He wrote about social issues, politics and economics.

Dasan JeongYak-yong’s letters from exile are filled with love for his two sons, older brother Yak-jeon and his students. He asked his sons to “read the books that saved the world” because “reading is the only way to survive as a member of a fallen family.”

But there are letters with mischievous intentions.

The most common is what we call “a letter of fortune.” It usually says something like: “This chain letter was first started in England, and if you send the letter to seven other people, fortune will come to you.”

These letters contain a curse. In fact, some say that U.S. President John F. Kennedy was assassinated after ignoring a letter.

There are also letters from the grave. In the 2007 film, “P.S. I Love You,” a wife receives letters from her husband who had passed away. The husband wrote the letters before he died, but the wife considers the letters as “messages from the heaven.”

Actress Jang Ja-yeon committed suicide two years ago, but the letters that she wrote over her lifetime are creating a controversy today in the Korean society.

Her letters are filled with grudges and frustration. In them, she asked her friend to seek “revenge on the 31 devils.”

Love is nowhere to be found in the letters. Her letters of fury may be a “message from hell” to the 31 people named by the actress.