A band that strives to spread smiles

A band that strives to spread smiles 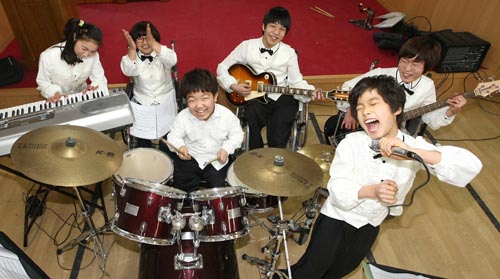 
Loud rock music blares from the Happy Rehabilitation Center in east Gwangju. The screaming vocals, keyboard, drums and electric guitars were not being performed by the popular rock band No Brain, but six children with disabilities.

Vocalist Kim Young-woong, 13, is the front man for the band Three-Leaf Clover.

“If a four-leaf clover is associated with luck, we believe a three-leaf clover implies happiness,” said Choi Jun-su, 16, another member of the band with a physical disability.

“We named the band in hopes of delivering happiness to people around us,” he added.

Three-Leaf Clover was formed in the summer of 2009 after social worker Han Seok-geun, 46, saw the children playing with drums in the corner of a hall at the Happy Rehabilitation Center. “The kids seemed to have so much fun beating the drums. That moment I thought, why not form a band?” said Han.

Han immediately put his idea into action. He auditioned 160 children at the center and selected six.

It is the first time a band has been formed at the center since it was established in 1950.

Among the six band members, Kim Hee-ae was the only one who knew how to play an instrument. The 17-year-old suffers from a brain lesion. The other members didn’t even know how to read music when they started.

Im Da-hyeong, 15, chose a bass guitar as his instrument; Choi, who is wheelchair-bound, picked a classic guitar; and Jo Myeong-gi, 16, who had his legs amputated, picked the drums. As Jo cannot press the foot pedal, he uses his hand. “An electronic drum does not need a pedal so it would be perfect for Jo. But we don’t have enough funds to purchase one,” said Han.

Three-Leaf Clover held their first concert last Christmas. Han admitted that no one, including himself, believed they would be skilled enough to hold performances. The band played the famous carol “All I Want for Christmas Is You,” along with two other carols.

When the concert ended, the audience gave them a standing ovation.

“Most of the children here either lost contact with their families or don’t have families,” said Han. “They used to have such low self-esteem, but I think they are learning how to love themselves through music,” he added.