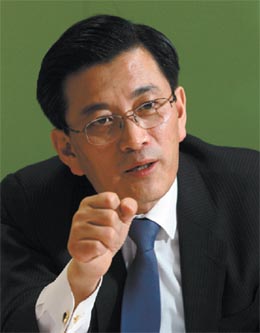 The sexy Chinese siren who entrapped several consuls at Korea’s mission in Shanghai appears to have been after a lucrative visa issuing business, not national security information.

And according to diplomatic sources contacted by the JoongAng Ilbo yesterday, the former Korean consul general in Shanghai, Kim Jung-ki, was the first diplomat to provide favors for the 33-year-old Deng Xinming.

Diplomatic sources told the JoongAng Ilbo yesterday that Kim put pressure on his staff to provide favors related to visas for Deng two years ago, when he already knew her well.

Mystery still surrounds how Deng ended up with some low-level confidential information, including contact information for the Shanghai consulate staff and for high-profile government and business VIPs in Korea. But Kim’s involvement is suspected in the leak, too, according to diplomatic observers.

After the scandal erupted Tuesday, three of Kim’s former subordinates in the consulate were suspected of giving Deng the low-level confidential information, in particular the VIP list. Photos of the three consuls, all taken in chummy poses with Deng, were printed by the Korean media, along with photos of the lists. The photos were provided to the Korean government and the media by Deng’s Korean husband, surnamed Jin, who wanted the government to stop the consuls’ relationships with his wife.

But diplomatic sources say that the main tale revolves around one of those three consuls seconded to Shanghai by the Ministry of Justice, and identified by the ministry by the first letter of his surname, H.

The sources say that former Consul General Kim already had an intimate relationship with Deng before H was assigned to Shanghai in August 2009 to be in charge of visa issuances.

H, who did not know Deng at the time, strongly protested the order, the sources said.

“Former Consul General Kim put pressure on former consul H on every side [to provide the favor to Deng] and H, who thought it was not fair, had a hard time because of that,” said a source.

The sources said Deng approached H and asked that her visa agency be named an official visa agency for the consulate. The two got friendly rapidly.

H gave Deng’s agency the official designation, the sources said, which she registered in another person’s name.

Then H fell in love with Deng. He admitted so when he was called home to be investigated by the Justice Ministry last November. He retired early last month and left Korea to go back to China, presumably to continue his relationship with Deng.

When the wife of H visited Shanghai from Seoul last year to complain about her husband’s affair with Deng, Kim ignored it. And he threatened punishment for any consulate employee who spread word of the affair between Deng and H, the sources said.

The sources said apart from a possible personal intimacy with Deng, Kim’s relationship with the Chinese woman may have been built on his own political ambitions.

Deng, who is rumored to have come from an influential family, helped Kim arrange several meetings between visiting Korean politicians and government officials and the top leadership of Shanghai.

“Kim appeared to have judged that Deng was the only link available for the consulate with the leadership of Shanghai,” said a source.

Despite the favors, Deng was known to have spoken ill of him, criticizing his pro-United States views. Kim graduated from State University of New York.

Kim has claimed that he knows little of Deng or of the affair.