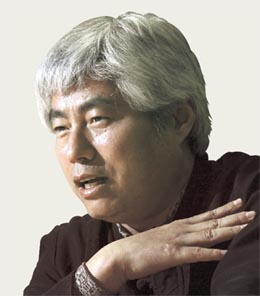 Jin Ok-sub, 47, a renowned artist in the traditional-Korean-dance genre, has dedicated the past several years of his career in search of the true “masters” of traditional dance. These masters, as he sees it, are not always the people designated as Intangible Cultural Properties. Instead, many of them are ordinary people who live in the countryside and practice dance not as an art form but as a way of life.

Jin featured many of these artists in a two-volume book he wrote on traditional Korean dance called “Noreummachi” in 2007.

Jin is perhaps best known among the general public as a choreography consultant for the 2005 blockbuster “The King and the Clown.” Through this and a number of critically acclaimed performance works, many of which feature dance masters, he has revived interest in traditional dance among a new generation of dance lovers. He is currently the artistic director of Korea Cultural House, whose mission is to preserve and promote traditional Korean culture through regular performances and workshops on performing, folk and visual arts.

Later this month, Jin will offer his insight into traditional Korean dance in a four-part lecture series at KCH called “Pungnyu [high art] and Hwaryu [low art] in the Humanities,” which examines the convergence of high and low art in traditional dance.

The JoongAng Ilbo met up with Jin to talk about the lecture series and his views on traditional dance in contemporary Korea.


Q. What motivated you to start this lecture series?

What were you trying to imply by using “pungnyu” in the title of your lecture series?

Moon Jang-won, a folk dance master, used to say, “I coordinate dance to teach my pupils and I never engage in despicable acts like receiving money for teaching them how to dance.” To him, dance was an innate part of life. This sentiment is deeply embedded in Korean traditional dance. As a result, there are no official guidelines or textbooks for learning the delicate gestures and motions of the dance. As a result, traditional dance became rather inconsistent. In this context, pungnyu implies a desire to maintain the elegance of Korean traditional dance while restoring its true nature.

Jo Gap-nyo (88-years-old) and Jang Geum-do (83-years-old), who are renowned performers of (a minimalist form of Korean dance presided over by a shaman to exorcise evil spirits), may be the last surviving dancers in the genre. They learned their movements from gisaeng (female entertainers) during the Japanese occupation.

Although they learned how to dance in gisaeng houses during the occupation, they maintained their dignity. If people think that their movements were seductive and coquettish, it is just socially induced prejudice. For both of them, their dancing maintained silence and formality while exuding elegance. I think that the elements of gisaeng culture in Korean traditional dance symbolize restraint. In the old days, it was said that the two performers were so popular that you needed two rickshaws to invite them to dance. In my lectures, I plan to correct existing negative perceptions of their dancing and gisaeng culture itself and interpret it from an aesthetic point of view.

What does traditional dance mean to you?