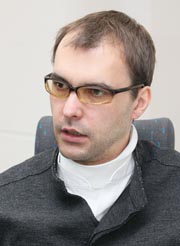 The complex, a symbol of reconciliation on the divided peninsula, combines South Korean capital and skill with cheap North Korean labor, providing the impoverished North with much-needed hard currency.

It has been largely affected by political tensions, which have often intensified following North Korea’s provocations, including the sinking of a South Korean warship blamed on Pyongyang.

Still, the rival Koreas have managed to avoid closing their joint project in the North’s border city of Kaesong.

The complex, which is home to more than 120 South Korean factories, offered a rare opportunity for Fleischmann, an artist from Schweinfurt, Germany, to dabble in so-called business art, in which artists create artwork after engaging in actual economic activities while earning money.

“There are many special economic zones in China and the Philippines, but Kaesong was different,” said Fleishmann.

“Usually economic zones aim to provide economically cheaper products but Kaesong is a mixture of economy and politics. That’s why I wanted to do my work there.”

The 38-year-old artist designed a shirt based on hanbok, a traditional Korean dress, and manufactured some 500 pieces in a Kaesong factory last year in cooperation with a South Korean clothing company.

He launched the project last March when the South Korean warship, Cheonan, sank in an attack that an international investigation blamed on the North.

As a German citizen who also has memories of a divided nation, Fleischmann said the Kaesong Industrial Complex is where people from the two Koreas can meet and work together without obstacles.

“At that time, tensions were high due to the Cheonan incident but when I got there it was peaceful and calm. North Korean people went inside an office of a South Korean company. There was no border in Kaesong,” he said.

He said his fashion show, scheduled for April 2-3 at a theater in downtown Seoul, will not be a typical performance in which gorgeous models in fancy stage costumes walk down a runway.

Instead, he plans to change the stage, lobby and seats to mirror something like a factory in Kaesong to make the audience feel as if they are on North Korean soil.

A female worker will be working in front of a sewing machine, showing the audience the production process.

“Before entering the North, I had to undergo special education on North Korea. In my show, spectators, too, take a similar course before visiting the factory,” he said, adding that there is an actual fashion show as well.

Two models will wear the shirts made in Kaesong.

“The purpose of my work is to make money through business and invest it all into the next program, not to make profit,” he said.

“When the shirts are sold out, I want to visit Kaesong again,” he added.