Making art of numbers and figures

Making art of numbers and figures 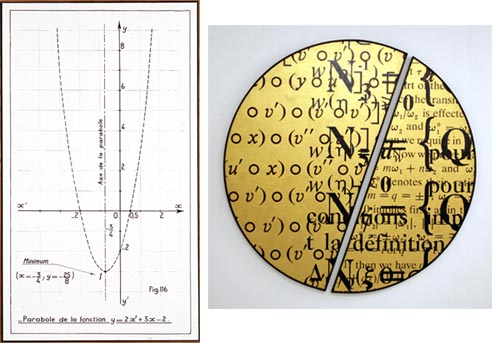 Bernar Venet’s “Parabole de la fonction y=2x2+3x-2” (1966), left, and “Gold Saturation with four N” are part of his retrospective at the Seoul Museum of Art in central Seoul. Provided by the museum


People who don’t like math may be very uncomfortable with the ongoing exhibition at the Seoul Museum of Art near Deoksu Palace in central Seoul. But they may eventually find themselves drawn to the numbers and figures displayed there.

Visitors to the show, titled “Bernar Venet Paintings 1961-2011: A Retrospective,” will encounter big square canvases covered with mathematical graphs and diagrams, murals made of mathematical formulas and canvases in many geometric shapes with layer upon layer of formulas and explanations.

People who feel antipathy toward math may wonder why they have to see so much of it in a museum. Others may simply wonder whether math can be considered art.

Bernar Venet, a renowned French artist, challenged reporters at the museum last week to consider similar questions about other works of art.

“Are El Greco’s religious paintings art or theology? Are Malevich’s paintings of squares art or geometry?” he said. “I don’t expect viewers to understand or like my art as soon as they see it. But I don’t want that, either. People tend to have antipathy for what is not clear and what is not familiar. But unclear and unfamiliar qualities give life to art. I want to show that such art is possible to explore the limits of art.” 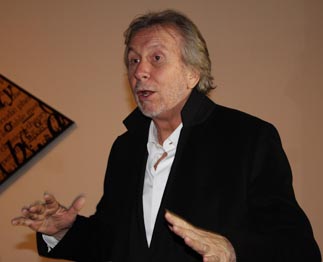 Perhaps it was in this context that American art critic and poet Donald Kuspit wrote in his book “Bernar Venet Art and Mathematics: In Search of the Sublime” that Venet’s mathematical murals “are more sublime than mathematical, or rather use mathematics as a springboard to the sublime.”

The 18th century German philosopher Immanuel Kant said the feeling of the sublime, unlike the feeling of the beautiful, is accompanied by awe, fear or some kind of displeasure from an object due to its overwhelming and unfamiliar qualities.

But why did the artist choose to use math to introduce art?

But he added that he does not regard figures in mathematical formulas as abstract forms.

“They are in between abstract and representational forms,” he said.

Viewers may be drawn into his art slowly enough to feel the sublime at the end, but some may also conclude that conceptual art such as Venet’s will forever be a mystery.

Venet is better known for metal sculptures that look like line drawings. According to the Seoul Museum of Art, Venet has worked in a wide range of media - from painting, sculpture and photography to performance, film, music and dance.

He told reporters that the paintings in this show are closely related to his well-known sculptures and other works and show the processes he has gone through since he was a young artist.

Among the 40 paintings in the exhibition is an early work he created when he was only 18. There are also a number of more recent works.