Let the sun shine in, on our children

Let the sun shine in, on our children 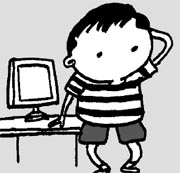 Vampires have three main enemies: garlic, the cross and sunlight. Vampires are burned black if they are exposed to the sun, so they became known as the “sons of darkness.”

But the vampires in the popular 2009 “Twilight” series are exceptions. The Cullens, including Edward, the protagonist played by Robert Pattinson, have white skin that shines brightly under the sun. Handsome young Edward’s white skin and see-through blood vessels are as much a symbol of wealth as is his Volvo car.

But the same pale, white skin means the complete opposite when we talk about the poets who suffered from tuberculosis at the end of the Joseon Dynasty. At the time, tuberculosis was a symbol of poverty. It was also a common disease among poor literary men, including renowned Korean poet Lee Sang. There was even a joke that “a poet becomes a true artist when he vomits blood.” People even said that “a poet suffering from tuberculosis who coughs up blood symbolizes vomiting at the oppression of Japanese colonial rule.”

In the West, too, the heroines of tragedies - like “La Boheme” and “La Traviata” - suffer from tuberculosis.

As a result, lung diseases like tuberculosis are known as illnesses caused by poverty because they often break out in poor neighborhoods in underdeveloped countries. And diseases caused by vitamin deficiency, such as night blindness, beriberi, scurvy and rickets, also belong in the same category. Rickets causes bone deformities due to Vitamin D deficiency. When we lived in poverty in the old days, a number of Koreans suffered from rickets and became hunchbacks. John Steinbeck’s 1939 novel “The Grapes of Wrath,” which is set in the Great Depression, also has a description of poor people suffering from rickets. Vitamin D is nicknamed the “sunshine vitamin,” because it is formed in our body when we are exposed to the sun.

Rickets is reportedly prevalent among Korean children these days. It is caused by a lack of outdoor activity because children are more interested in watching television and playing computer games. Wearing sunscreen to prevent a suntan is another reason.

In an era of affluence, it is ironic that a disease of poverty is so prevalent. There is no reason for our children to be fearful of sunlight, as vampires are, and sunlight is free, too, so there is no reason why children can’t get enough of it to prevent them from getting sick.