I have fallen in love with U.S. college basketball

I have fallen in love with U.S. college basketball 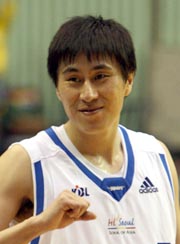 It is a bit embarrassing to be called a student.

I came to New Jersey in August last year to study at a language school. Most of the Koreans studying with me here are younger than me, some young enough to call me “uncle.”

Still, there is one thing that makes me feel happy about being a student these days - NCAA basketball.

College basketball is not that popular in Korea but in the United States, college basketball surpasses the NBA in popularity. This time of year, called “March Madness” in the U.S., just about every sports channel on television shows NCAA basketball games.

To be honest, I was not very interested in college basketball when I was in Korea but when I got here I couldn’t take my eyes off the television.

The NBA features plenty of individual skill and fun theatrics but college basketball in the U.S. stresses defense and team work and players seem to display more passion and grit. Players wear their school uniforms with pride and fans, both students and adults, root for their teams with gusto, making NCAA basketball extremely exciting.

It reminds me of regular rivalry games between Yonsei University, where I played and Korea University. (The two prestigious Korean universities hold rivalry events in numerous sports every year.)

But one of the main reasons why college basketball is so good is because the games showcase some of the best young talent in the world. Talent that is potentially NBA ready.

Brigham Young University basketball player Jimmer Fredette posted 47 points in a rout of rivals Utah on Jan. 11. The sports news on television that night was dominated by the 22-year-old’s performance.

I was attending an NBA Developmental League showcase in South Padre Island, Texas, when Fredette dropped 47 on Utah and many of the agents I met that day mostly talked about him.

Few of them doubted he would become one of the top 10 NBA draft prospects.

Fredette seemed like a good player, but I thought he moved a bit slow.

One of them answered quickly: “No. But, they can’t defend his shots.”

While some players, like Fredette, make a name for themselves on their own, others have the benefit of sharing the same name as previous basketball greats.

While taking a rest at home last week, I turned on the television to watch some NCAA games.

The main camera kept chasing a short guard. I thought he had terrible form but he clearly had enough presence on the court to lead his team. Then the camera zoomed in on someone in the crowd. It was Utah Jazz Hall of Famer John Stockton and the small guard was his son, David.

It is these young heroes who will make March the most exciting month of the year. The first game of the 68-team NCAA tournament is tomorrow and will kick off an almost month-long gauntlet that will determine college basketball’s true champion.

Whether traditional powers like Duke and North Carolina win or some lesser known team manages to dance to the championship, only time will tell.


Lee Sang-min is one of the all-time best players in Korean Basketball League history.

He is now taking a vacation in the United States with his wife and two children.

*A guest reporter for the JoongAng Ilbo, Lee sent this report from the U.S. last week.