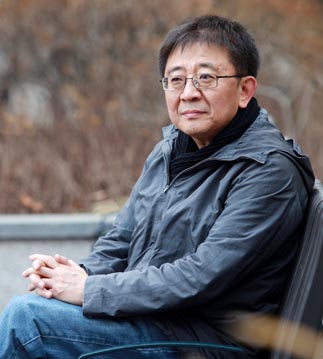 Forced to smile for a photo before our interview, filmmaker Zhang Lu reluctantly obliged, joking that his appearance clashed with the beautiful, sunny day.

“I’m being punished now for putting my actors through grueling film shoots,” he laughed, as he continued to pose awkwardly for his picture.

Zhang’s dry wit echoed the tone of his latest feature film, “Dooman River,” a coming-of-age film about the ill-fated friendship between two boys - one is a North Korean defector while the other is an ethnic Korean boy who was born in China. The film is set in a Chinese village near the Tumen River, the border dividing North Korea and China. The physical boundary that separates the two boys also creates a spiritual divide between them.

The director’s clever use of symbolism also extends to the main image in “Dooman River” - a snow-covered mountain village.

The off-white snow conveys a sense of innocence and starkness, reflecting the nature of the two boys, who have little understanding of themselves or each other.

As with his previous feature films, including “Iri” (2008) and “Grain in Ear” (2005), “Dooman River” (2010) is a no-frills, realistic film with minimal dialogue and few special effects. That approach has won Zhang numerous awards on the international film festival circuit, starting with a Golden Alexander award nomination at the Thessaloniki International Film Festival in 2005 for “Grain in Ear” and a Golden Bear nomination at the Berlin International Film Festival in 2007 for “Desert Dream.”

The camera-shy director was elusive when asked about his personal life, explaining that whenever he opens up about himself he feels it detracts from his films. Regardless, details of the unconventional path that led him to become a filmmaker have leaked out and continue to attract interest from the media.

Before picking up a camera, the 48-year-old director was a Chinese literature professor and novelist in China. He was close to 40 when he suddenly decided to become a full-time filmmaker after an argument with a film industry friend led him to think about turning his lifelong hobby into a career. The Korea JoongAng Daily caught up with Zhang on a recent afternoon and talked with him about his new movie, his pessimism about the human race and his feeling that anyone with a view of life can become a director.


Q. Why did you decide to focus on the problems of North Korean defectors in “Dooman River”?

A. I started writing the screenplay for “Dooman River” in 2003. During the early 2000s, there were many stories about North Korean defectors in the news. Also, I was born and raised there [on the Chinese border with North Korea] and the conflicts and problems related to this issue were part of my reality.

Even though the film revolves around North Korean defectors, I felt that “Dooman River” was ultimately a coming-of-age film.

I’m flattered you said that. I would have been disappointed with myself if someone who watched the film said it was about North Korean defectors. I have absolutely no interest in the social problems surrounding the defectors. I am only interested in the people themselves and how much they suffer and risk to escape their country in the hopes of making a better life for themselves.

Why are the central characters two young boys?

When tough times arise, both adults and children suffer. However, I think it is more disheartening, more painful, to see a child suffer under these conditions. If you go through some kind of painful experience as a child, I think in many ways that the scars stay with you well into adulthood. The audience invests more of their feelings when the character going through these experiences is a child.

There is a scene in the movie in which a young girl is raped by a North Korean defector. In that scene, the TV is on and we see black-and-white footage of Kim Jong-il marching with his army. Why did you put these two elements together in one scene? Did you have a particular political agenda?

No. There was no political agenda behind the scene, but I think that it could be interpreted that way by many people. I actually had a very specific reason for putting those two elements in that scene. You see, the North Korean defector has risked his life, his everything, to cross the border to escape to China. He is now here (China), not there (North Korea) and wants to forget everything about North Korea at that point. But when he hears the clip from his homeland, he momentarily goes insane.

I had a similar experience three years ago. I was in a cafe in Paris and all of a sudden I heard a song from when I was a boy, a song from the Chinese Cultural Revolution era. In that moment, I just kind of zoned out. It felt as though time and space had become mixed together. There was a brief vacuum in time at that moment and I thought, wow, a person could potentially go crazy in a moment like this.

You were a novelist before you became a filmmaker. Do you think your films have a literary undercurrent running through them?

I think reporters and film critics are always trying to find a literary basis for my films, but I try to avoid any sort of literary approach when making a film. Conveying emotion through text and through images are two very different things. If I were able to convey my views fully through text, I wouldn’t have to bother with making films, right? I don’t like it when I smell some sort of literature-based narrative in films.

You never went to film school and were never trained in the technical aspects of filmmaking. How did you do it?

You know, a lot of film people tend to exaggerate when talking about the technical aspects of filmmaking. I feel that all you need to know to become a director is how to take a certain space and time, filter it into your own emotions and portray it visually. If you make just a little effort the technical stuff is very easy.

What made you become a filmmaker?

I think when I was younger, I had a really immature, boyish fascination with movies in general. “Wow! There are people in that small screen moving around!” In China, films and cameras were out of our reach as youngsters - not like today. Even now, if you live in China and are a film industry man, it will be tough to get a bride. (Laughs). It’s an unstable job, and taking on this career wasn’t a calculated move on my part in any way.

What kinds of films do you watch when you feel lonely?

Well, I think when I’m really happy or really sad, it’s the same - I drink. (Laughs). Why watch movies when you’re lonely? I drink.

When I watch your films, I feel a certain pessimism, a distrust in people in general. Do you think you have a pessimistic worldview?

When I was younger, I think I was that quiet kid in the corner all by himself. As I got older I guess I grew a thicker skin, and now I’m able to talk more openly. To be honest, as a group, I have no faith or hope in the human race, but I am interested and have faith in each individual - you or Mr. Kim or Mr. Park or whoever. In life there are more moments of loneliness and sadness than pure happiness. Happiness is only a finite moment. I feel that films that convey a sort of vague, idealized notion of happiness or hope are cruel.