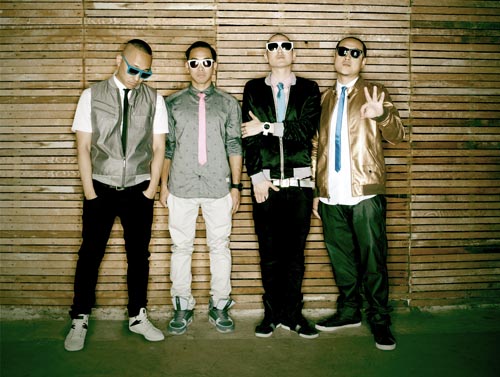 
Will.i.am, a musician and producer with the Black Eyed Peas, one of the most sought-after U.S. hip-hop groups, grabbed attention from Koreans last September when he inserted a bunch of Korean words and phrases into the music video for his single, “Check It Out.”

Far East Movement, an Asian-American electro hop quartet that will have its first concert in Seoul on Saturday, did him one better with the music video for their hit single “Like a G6.” The video shows a group of friends eating Korean food, drinking soju and partying in Los Angeles’ Koreatown.

More importantly, the star players in the video are the four Asian-Americans who make up the group, also abbreviated FM.

The group, which was formed in Koreatown, includes two members of Korean descent - Prohgress (James Roh) and J-Splif (Jae Choung). The other two members are Kev Nish (Kevin Nishimura), who is of Japanese and Chinese descent, and DJ Virman (Virman Coquia), who is of Filipino descent.

Formed in 2003 under the name Emcee’s Anonymous, the group said in an earlier interview with the Los Angeles Times that it later renamed itself to show they “respect and take pride in [their] culture.”

The much-talked-about hard-beat dance number “Like a G6” propelled Far East Movement to the top of the charts, and they became the first Asian-American group to hit No. 1 on the Billboard Hot 100 singles chart in late October.

They went to No. 7 on the Hot 100 in February with another single, “Rocketeer,” from their “Free Wired” album.

Their recent success has led them to tour with Lady Gaga, Jay-Z, Snoop Dogg and the Black Eyed Peas - a list of musicians they said in a previous interview they’d never imagined playing with.

The following are excerpts from a recent e-mail interview with the group.


Q. How was your showcase in Seoul a few years back?

A. So much fun! We went to Busan and Seoul. We did all the clubs almost underground style. It was part of a world tour we did. So we did Korea, China, Singapore, Amsterdam, Brazil and France. We got all the shows just by meeting people on the Internet.

As artists, we try to learn and really experiment. We’ve had our ups and downs, but that’s brought us closer together as friends and helped us understand what we want to do musically.

So it was a great experience. And one thing we’ve never forgotten is how incredible the food is in Korea. It’s amazing.

What do you expect from your upcoming concert in Seoul?

We expect to have a good time and work hard for our fans and family out there. During our show we’ll be blending elements of all the genres that inspired our “Free Wired” album - hip-hop, MCing, turntablism, electro-dance, alternative rock and pop - and making sure it’s a party all the way through. We love to sweat it out and geek out on stage and we hope everyone who comes out will do the same.

The original members of the group - J-Splif, Prohgress and Kev Nish - started performing together in 2003. When did music become your full-time job? And what made you decide to devote yourselves to music?

We were all friends in high school. We would always mess around with beats and rhymes whenever we had time. Slowly, this turned into writing songs, recording songs and finally performing wherever we could.

After getting our feet wet doing some shows, we realized that music was something that we wanted to pursue. So we decided to throw our own event: the first of its kind for our hometown, Koreatown, Los Angeles. We called it “Movementality,” a live performance by 10 different bands with all the proceeds going to a local youth drug rehab center. While we were promoting it we met our manager, Catch, who shared the same vision that we did of raising awareness for Asian-Americans through music. We decided to combine forces, and things came together piece by piece from there.

What is your philosophy when it comes to making music?

FM music is free wired sound. Free wired means you’re free to geek out, that you stay connected, that you’re up all night online, and then you gotta put shades like these on.

What challenges, either musical or personal, did you face before making it to the top?

We had to find the right style, so we had to try on a lot of different shoes, a lot of different outfits, until one fit and looked just right. We feel that this is the shoe that fits for us. We were such fans of music. If the verse didn’t sound like a Mos Def or Outkast verse, then we would throw it away. It got to the point where it just felt like we needed to do our own thing. We weren’t getting enough attention, and we learned from interning that you need to start your own movement and create your own sound.

Do you listen to Korean music?

We love all types of music, including Korean. We’ve been in Seoul touring and working and have had a chance to listen to lots of K-pop. We love it just as much as American and French music. Korean music is the best dance music and has great videos. We want to get to know the music more when we are in Korea.

Is there anyone with whom you’d like to collaborate?

We love the Beastie Boys. It would be an honor to work with them. We actually sampled their song “So What’cha Want” on our album “Free Wired.” We also like Kanye West.

Kanye actually Tweeted “I feel fly like a G6.” We are big fans of his and doing a song with him would be incredible.

Among Asian-Americans, who do you count as role models?

*Far East Movement will play at 9 p.m. on March 19 at Vista Hall in the Sheraton Grande Walkerhill Hotel in eastern Seoul. Tickets cost 88,000 won ($78). The concert is standing room only. Drinking and smoking are prohibited, but those who arrive early will be given free beer to drink outside.