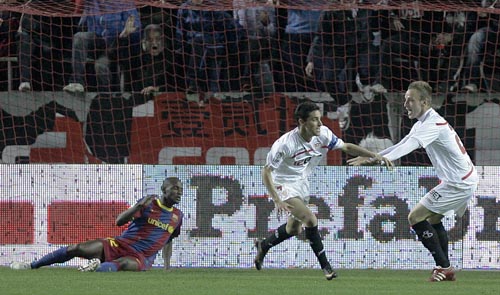 
MADRID - A second-half equalizer from Jesus Navas earned Sevilla a 1-1 draw against Spanish league leader Barcelona, whose advantage over Real Madrid was cut to five points on Sunday.

Barcelona striker Bojan Krkic scored from Daniel Alves’ pass on the half hour mark at Sanchez Pizjuan Stadium but Alvaro Negredo crossed for Navas to head home a deserved equalizer in the 49th minute.

Argentine forward Lionel Messi survived an injury scare to hit the crossbar with a header for the Catalan team.

Barcelona still managed to match a club record with its 26th straight league game without defeat - last achieved during the 1973-74 season.

But the two-time defending champion allowed its closest opponent to gain ground after Madrid warmed up for Wednesday’s Champions League match against Lyon with a 2-0 win over Hercules on Saturday.

“We leave with a bittersweet taste because it feels like we let two points escape,’’ Alves said. “But this is going to be a fight until the end. The difference was far from significant before and it remains that way.’’

Barcelona, coming off a Champions League win over Arsenal, has two more tough away games ahead: at Villarreal and then Madrid.

Messi looked to have put Barcelona ahead after just eight minutes as he curled an exquisite free kick over Sevilla’s defensive wall and past the outstretched fingertips of the goalkeeper Javi Varas.

But the strike was ruled out because teammate Sergio Busquets had tussled with Martin Caceres as the free kick was taken.

While Barcelona felt hard done by, so did Sevilla in the 24th minute when Alves impeded Didier Zakora from reaching a cross inside the Barcelona area but got nothing. Bojan’s first goal since Dec. 12 came after Iniesta found Alves, who set up the young striker after beating the offside trap.

Barcelona held its breath at halftime as Messi pounded the ground in pain after clashing with Varas but the 23-year-old forward eventually hobbled off the pitch and to the relief of everyone associated with Barca, returned for the second half.

Sevilla showed more verve after the restart with Frederic Kanoute’s entrance. Negredo’s impressive control drew goalkeeper Victor Valdes out of his goal before Navas met his cross into the middle, heading home with the Barcelona defense scattered.

Towards the end of the game Messi just missed Bojan’s cross into the area in the 83rd minute as both teams sought a winner, with Iniesta’s curling shot coming off the crossbar with four minutes left.

“I’m happy and satisfied because we played at a great level,’’ said Sevilla coach Gregorio Manzano. “It’s tough to win against this team so a draw satisfies us. We could have lost the game or won it and that’s something few can say against Barcelona.’’

In other games, Valencia lost 4-0 at Zaragoza on Saturday while Madrid warmed up for their upcoming Champions League match with a 2-0 win over Hercules.

Athletic Bilbao can overtake Espanyol and retake fifth by one point with a victory over Getafe on Monday.