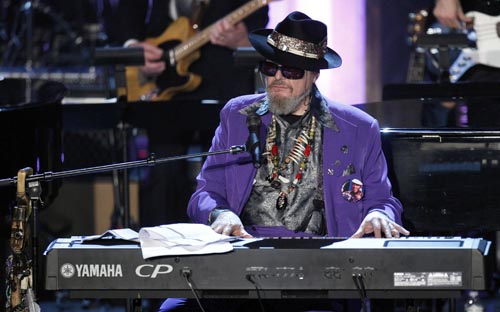 Piano master and singer Dr. John performs during the 2011 Rock and Roll Hall of Fame induction ceremony at The Waldorf-Astoria hotel in New York, yesterday. [REUTERS]

Fellow pianist Leon Russell and “Wall of Sound” singer Darlene Love also were to be inducted at a black-tie dinner at The Waldorf-Astoria hotel in Manhattan.

A tape of the ceremony is to air March 20 on Fuse.

Dr. John said he felt “like I’m blessed to be singing, to be breathing.”

He was inducted by singer John Legend, who recalled meeting him at a benefit for Hurricane Katrina relief. Legend said the new Hall of Fame member has been a leading global ambassador for New Orleans and its special musical gumbo.

“He has never stopped flying the flag of funk,” Legend said. “Tonight, he is definitely in the right place at the right time.”

That was a reference to one of Dr. John’s best-known songs, “Right Place, Wrong Time,” with Allen Toussaint and the Meters.

The Brooklyn-born Diamond wrote pop-rock hits for himself (“Solitary Man”) and others (The Monkees’ “I’m a Believer”). Presidential daughter Caroline Kennedy was the inspiration for “Sweet Caroline,” now a Boston Red Sox anthem.

Diamond settled into a career as a middle-of-the-road concert favorite, although he made some challenging recordings in recent years with producer Rick Rubin.

He said before the ceremony that he had flown in from a concert tour in Australia and was flying back when it was done.