Top Turkish singer shot in the head over the weekend

Top Turkish singer shot in the head over the weekend 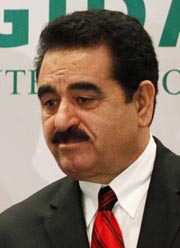 ISTANBUL - Famous Turkish singer Ibrahim Tatlises, popular across the Middle East, was clinging to life Monday after being shot in the head in Istanbul, media reported. An unknown gunman opened fire on the 59-year-old singer about 30 minutes after midnight Saturday as he was leaving a television studio and about to climb into a car, several newspapers reported. At least one bullet entered the back of his skull and exited through the front, chief surgeon Caglar Cuhadaroglu said after a four-hour operation on the singer, the Anatolia press agency reported.