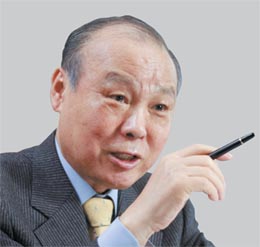 A little more than a year is left until Expo 2012 opens in the southern port city of Yeosu, South Jeolla, on May 12. Since the city was selected in November 2007, preparations have been carried out at full speed to accommodate the millions of visitors that are expected to participate and tour next year.

“We are aiming to get construction completed for the expo within this year,” Kang Dong-suk, chairman of the expo organizing committee, said in an interview with the Korea JoongAng Daily. “Around 38 percent of the construction is now completed.”

It’s not the first time Kang has directed a large-scale project - he was in charge of the Incheon International Airport construction more than a decade ago.

The chairman said that the main goal for the expo was to place the ocean itself on display for visitors to see. The theme for the expo is “The Living Ocean and Coast.”

The preparation committee has a budget of 2.1 trillion won ($1.9 billion) to prepare for the expo, with 1.7 billion won going into facilities, which will display a variety of themes ranging from climate and port civilizations to marine life. Exhibit halls for international organizations, enterprises and participating countries are also expected to make the venue more lively.

An aquarium is also being built, which, upon completion, will be the biggest in the country.

“There is so little we know about the ocean,” said Kang, explaining the efforts being made to place the ocean at the center of the expo.

Yeosu’s shoreline has been polluted by its role as a port city used for commerce and industry.

“We have blocked the flow of pollutants into the ocean and we are recycling seawater,” Kang said. “By May next year, it will be an ocean of life.”

Kang said measures were also being undertaken to prevent the extensive Expo construction from adding to ocean pollution.

With ambitious planning and shoreline building proceeding as planned, the preparation committee has high expectations for next year’s event.

As of this month, 88 countries have agreed to participate in the expo, with 22 from Europe, 15 from the Americas, 25 from Asia, 19 from Africa and seven countries from the Middle East. The committee is expecting 8 million visitors from those countries and beyond for the three-month event.

To help visitors get to the city, which is roughly 350 kilometers (217 miles) away from Seoul, the committee has invested a large amount of its budget into infrastructure, including a new highway and train that will whisk visitors to the expo site from Seoul. Those who also wish to go by air can fly to Yeosu Airport.

“It will likely take three hours by car, and about the same time by train,” said the chairman.

To prevent the city, which has a population of about 300,000, from being overwhelmed by the number of visitors next year, the committee is also preparing parking-lot hubs. Visitors can leave their cars there and use designated Expo transportation to get to the exhibition area.

The committee expects the event will generate 12.2 trillion won ($10.75 billion) in revenue and 79,000 jobs. With the expected boost from the expo, Yeosu is preparing to transform itself into a city for marine tourism, said Kang. It is expanding the port to allow cruise ships of up to 80,000 tons to dock and is preparing to provide tour packages for visitors form neighboring countries during the expo.

“All the display pavilions will be demolished - only the symbolic facilities will be kept and we will turn the city into the center of marine tourism,” said Kang. “We have 400 islands near Yeosu. It will become the mecca of seashore tourism, even beyond Japan or China.”

To boost preparations, most of the offices for the expo committee will be moved from its current site in Seoul to Yeosu in a few months. The office has been in Seoul for easier access to companies cooperating in the construction at the port city.

“I go to Yeosu at least once or twice a week. We will all be moving the first of July,” Kang said.

Leaving a minimal number of staff for communications duty, roughly 230 employees will be packing their bags and moving south in the summer. There will be 3,000 workers and volunteers helping at the site during the event, which will be open for three months starting from next May.

“It will be beyond comprehension,” said the chairman.