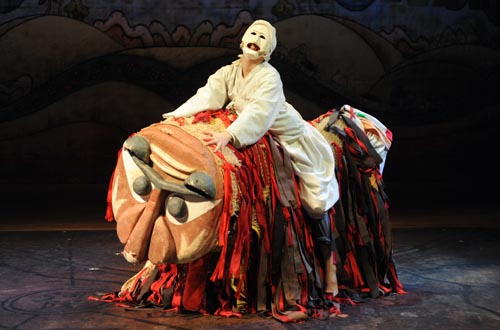 Artists perform in “Bukcheong Lion Dance,” which tells the story of a lion and tiger punishing humans for infecting animals with influenza. It starts Friday and runs through April 17 at Seoul Namsan Gugakdang. See TRADITIONAL PERFORMANCE. Provided by the Sejong Center for the Performing Arts

Saturday: Asian-American electro-hop quartet Far East Movement will have its first concert in Seoul on Saturday.

The group bolted to the top of the charts in late October with their hard-beat dance number “Like a G6,” becoming the first Asian-American group to hit No. 1 on the Billboard Hot 100 singles chart. They went to No. 7 on the Hot 100 in February with another single, “Rocketeer,” from their first major album “Free Wired.

March 23: A handful of talented Korean classical musicians - including tenor Bae Jae-chul, violinist Yang Go-un and pianist Kim Youn-kyung - are set to perform solos and ensembles to celebrate the launch of COPE (Culture Opportunity for People Everywhere), a nongovernmental organization.

March 23: Jazz singer Nah Youn Sun returns to the LG Arts Center for her first concert in Korea in five years. Called the “greatest jazz singer of today” by French newspaper Les Echos, Nah received the French Order of Arts and Letters in 2009, becoming the first Korean musician to do so. Her most recent album, “Same Girl,” was No. 1 on the French jazz charts for four weeks, another first for an Asian musician.

The program includes Mozart’s Violin Concerto No. 3 in G Major, Stravinsky’s “The Rite of Spring,” and Theofanidis’ “Muse.”

April 1: It’s a bit hard to describe MGMT, comprised of duo Andrew VanWyngarden and Ben Goldwasser. Their musical style is a mix of psychedelic, synthpop and indie rock, and their music videos almost always border on the bizarre. But that doesn’t change the fact that MGMT has been extremely popular with young listeners since the group first burst onto the scene in 2007 with their first major album “Oracular Spectacular,” which was released to much critical acclaim.

Since then, the duo has been nominated for three Grammy Awards and went on to release their second major album, “Congratulations,” last year.

To Saturday: This play is about a love triangle between a Vietnamese singer, a Korean private and an American Colonel during the Vietnam War’s Tet Offensive in 1968.

The program is offered six to seven times per month through December. Commentary by music experts will be provided between acts.

This month, Offenbach’s “The Tales of Hoffmann,” directed by Tony Award winner Bartlett Sher, will be shown on March 22 and 29.

March 25 to 28: The Universal Ballet Company presents a comic version of Miguel Cervantes’ novel “Don Quixote de la Mancha,” the story of an aging gentleman who believes himself to be the character in the books he is reading.

A different dancer performs in the lead role on each night.

To March 27: “Aida” has returned to Korea after a five-year absence.

This story of Ethiopian princess Aida is one of forbidden love. Aida is captured and sold into slavery in Egypt, where Egyptian military commander Radames falls in love with her. As the military commander of Egypt, Radames is not allowed to love a woman from a different country, and he struggles to choose between her and his service to the Pharaoh. To make matters worse, the Pharaoh’s daughter, Amneris, is in love with him. Will Radames chose love or success?

To March 31: The first Korean-language performance of “Jekyll and Hyde” was in 2004. Since then, this musical has been a favorite with Korean audiences. Jekyll and Hyde is set in London in 1885. Henry Jekyll is a doctor and scientist who lives with his sick father and decides to devote his life to finding a cure for his mental illness. When he decides to experiment on himself, he starts to become his frightening other half - Hyde. Cho Seung-woo and three other actors alternate in the role of Jekyll.

Friday to April 17: This musical tells the story of a lion and tiger coming to earth to punish humans for killing ducks and chickens with influenza. It was created by director and choreographer Oh Tae-suk of the Mokhwa Repertory Company.

March 26 to April 1: This annual art and music festival presents a collection of performances by international musicians like the British Hilliard Ensemble, Heiner Goebbels’ Music Theater, and winners of the Tongyeong International Music Festival competition.The festival gets its title, “Moving Dimension,” from “Dimensionen,” a piece by Korean-German composer Isang Yun (1917-1995), who served as the inspiration for the festival. The festival focuses on promoting young Asian composers and is led by artistic director Alexander Liebreich, the primary conductor and artistic director of the Munich Chamber Orchestra.Performance times vary.