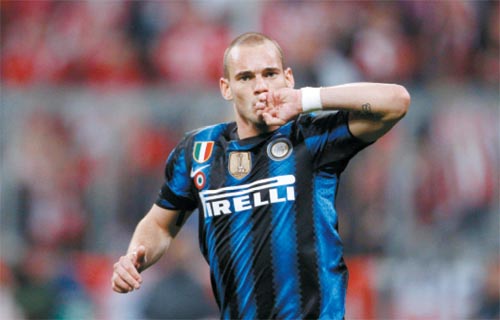 
LONDON - Title holder Inter Milan staged a second-half comeback to oust Bayern Munich on away goals in a repeat of last season’s final and Manchester United advanced to the Champions League quarterfinals for the fifth consecutive season by beating Marseille 2-1 on Tuesday.

Goran Pandev’s 88th-minute goal for Inter earned a 3-2 victory at Bayern that sent the Serie A side through on away goals, having lost 1-0 at the San Siro.

Inter is only the second team in Champions League history to overturn a first-leg home defeat to advance.

“It’s a historic result considering how difficult the game was and how strong our opponents were,” Inter coach Leonardo said. “It’s a sign that these players have great faith in the team, we never give up. The European champions are still standing.”

United’s victory over Marseille was more routine despite nervy moments, with Javier Hernandez scoring twice to secure victory after the match in France was drawn 0-0.

In Munich, Pandev not only sealed the victory but set up Samuel Eto’o’s opener after four minutes with a neat pass that sent the striker through.

Having beaten the offside trap, Eto’o slotted through the legs of Bayern goalkeeper Thomas Kraft to score his eighth goal in this season’s competition. A mistake by Inter goalkeeper Julio Cesar gifted Bayern an equalizer. The Brazilian fumbled Arjen Robben’s attempt from 20 meters and Mario Gomez hooked the ball into the net in the 21st minute.

Thomas Mueller scored for Bayern 10 minutes later. Robben cut in from the left and an attempted interception only succeeded in putting the ball through for Mueller to score.

“We created so many chances and didn’t use them, and we didn’t defend well in the second half,” Bayern coach Louis van Gaal said. “That’s how the opponent remains in the game.”

Inter’s recovery began in the 63rd minute when Wesley Sneijder fired a shot into the corner of the net.

Later, with Bayern clinging on, Eto’o raced ahead of defender Breno and sent the ball to Pandev, who fired into the top corner.

“It couldn’t have started better for us but then we gave them more room and that’s when they are dangerous,” Leonardo said. “It was tough, after losing in the last minute at home, to turn this game around. I always believed however and when we equalized at 2-2 I knew everything was possible. It was a really incredible game.”

At Old Trafford, Hernandez put United ahead five minutes into the match after latching onto Wayne Rooney’s cross.

The Mexican striker then got his 15th goal of his debut season for United in the 75th minute. He netted from close range after Welshman Ryan Giggs squared the ball into the penalty area having received it from substitute Antonio Valencia.

The only downside for United was that defender John O’Shea and his replacement Fabio both came off with suspected hamstring injuries. “The balance of the team was affected with two defenders coming off,” Ferguson said. “There was a lack of experience in the team and that could have cost us, but we hung on.”