Let the punishment fit the crime

Let the punishment fit the crime 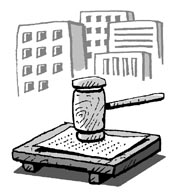 The Code of Hammurabi, dating to 1750 BC, was written in cuneiform script and consisted of 282 laws. Hammurabi, the Babylonian king, enacted the code after he unified Mesopotamia. Its most familiar law is “an eye for an eye, a tooth for a tooth.”

There was a similar clause in the Eight Clause Law of Gojoseon (2333 BC-108 BC) mandating that murderers be punished by death.

The history of scaled punishments such as these is very long. Eventually, such punishments became an important part of continental law of European countries, including Germany.

In Germany, the law stipulated that the one who causes harm to the other side should pay “compensatory damage” in a civil suit.

In the United Kingdom and United States, however, crimes could not be controlled only by compensatory damages.

Thus, Anglo-American law introduced “punitive damages,” whereby the offender is punished with a much higher amount than the actual damage suffered by the injured party.

The law was first introduced by a British court in 1760 and was later adopted by the courts of the United States.

Korean civil law also adopts the principle of compensatory damages, which is why the Fair Trade Commission is opposed to the idea that punitive damages should be used to reduce the tyranny of big business.

This is one of the outstanding changes that has been made since Kim Dong-su became the head of the FTC earlier this year.

Korea does have a law that adopts the principle of punitive damages. The election law requires that those who accept money or entertainment from political candidates be fined up to 50 times the value of what was accepted.

Big businesses have been criticizing the National Assembly’s revised bill as a political decision, made by the ruling Grand National Party to gain more votes for next year’s general elections.

But it is fair to say that these companies have no basis for their complaints because their contemptible behavior continues even now.