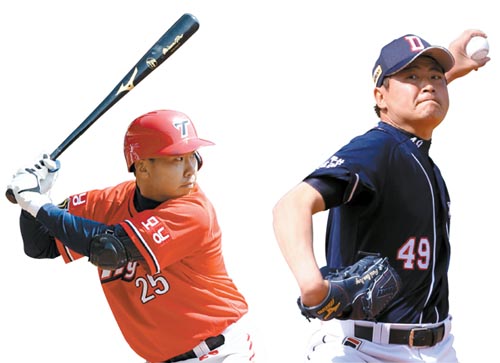 Kia Tigers third baseman Lee Bum-ho went 2-for-3 with an RBI in a 2-0 win against the LG Twins Wednesday, while Lee Hye-chun, a pitcher for the Doosan Bears, threw five scoreless innings while striking out seven against the Samsung Lions on Sunday.

“I am in good condition,” Lee Bum-ho said to Ilgan Sports after the game. “I am preparing for the season without pressure.”

The two players went to Japan looking to replicate their KBO success in what is normally considered a higher-level league but both of them faltered and even had trouble staying on their respective clubs’ main rosters, moving frequently between the minor leagues and the NPB.

Lee Bum-ho, a two-time Golden Glove winner in the KBO, left the Hanwha Eagles in 2010 to play for the Fukuoka Softbank Hawks but he only had a .226 batting average, four home runs and eight RBI in 48 games. Lefty Lee Hye-chun, who left the Bears in 2009 for the Tokyo Yakult Swallows, spent two seasons in Japan and compiled a 1-2 record with a 4.12 ERA.

Leaving terrible memories behind, the two players have returned to their homeland for a new start. Now, both players are hoping to give a boost to their teams. While Lee Hye-chun returned to his old team, the Doosan Bears, Lee Bum-ho signed with Kia, the winner of the 2009 Korean Series.

Tigers fans are expecting Lee to strengthen the team’s offense, completing a power-hitting trio with former Chicago Cubs player Choi Hee-seop and 2009 MVP Kim Sang-hyeon. After all, before moving to Japan, Lee was considered a solid hitter, posting a .284 average with 25 home runs and 79 RBI in 2009.

The 30-year-old Lee will bat third in manager Cho Bum-hyun’s lineup and wants to focus on getting doubles so that the usually stronger fourth and fifth batters in the order can drive him in.

“I think it is important to reach base first because we have good fourth and fifth batters,” Lee told Ilgan Sports. “This will be my effort to help my team win the championship.”

Lefties in the KBO only hit .193 against Lee in the 2008 season and he is expected to continue that success as a starting pitcher for the Bears this season. While some baseball experts have pointed out that Lee lacks control and consistency, Lee said playing in Japan actually helped in that area of his game.

“Experiences in Japan really helped me because I learned how to keep composure,” Lee said in an interview with Ilgan Sports. “In the past, I just tried to throw the ball hard, but now I am trying to follow my body’s signs and how I feel.”

It may be too early to judge whether both players will shine in the 2011 season but at least for Lee Hye-chun being back in Korea is already good news.

“I experienced rock-bottom in Japan,” Lee said. “But now, there’s nowhere to go but up.”