North Korean defector plumbs his past for film

North Korean defector plumbs his past for film 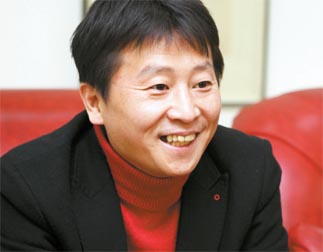 North Korean defector-turned-filmmaker Jung Sung-san turned his life into art when he made a musical about a North Korean gulag in 2006, and he’s done it again with his first film, “Ryanggangdo Children,” which opened here in theaters yesterday.

Inspired by a question from a friend about whether he had Christmas while growing up in the North, Jung finished writing the screenplay for the film in just a week.

The film follows a North Korean child who finds a Christmas present sent by balloon from South Korea. A robot and Santa Claus costume are inside the gift. He and his friends play with the toys until a villager finds them and tries to take them away.

When asked how he feels about the release of his film, which was eight years in the making, the 42-year-old director grinned and said, “I feel like I’ve just found my lost child.”

Jung has few traces of the accent that once marked him as a defector when he arrived here in 1996. But though he has shed the external trappings of his identity, he has spent much of his time since then plumbing the depths of his past.

Having majored in film at Pyongyang University of Dramatic and Cinematic Arts and Moscow State University, Jung joined Taeyoung Productions, a renowned but now defunct film production company, in the same year he defected from the North. Starting with the film “Shiri” (1998), Jung participated in the production of a string of hit films such as “Joint Security Area” (2000) and “Silmido” (2003) that all revolve around North Korea.

“Silmido,” “Joint Security Area” and “Shiri” are still ranked the 4th, 7th and 8th highest-grossing films in the country, respectively, according to the Korean Film Council. 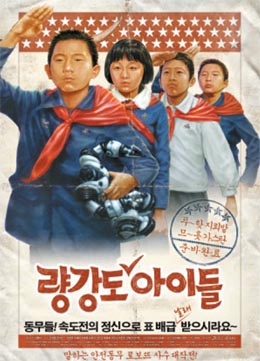 Jung’s next project was the musical “Yodok Story” in 2006. The musical, set in a North Korean prison camp, earned critical and popular acclaim here and abroad. It also attracted the attention of Polish filmmaker Andrzej Fidyk, who made a documentary about it called “Yodok Stories” that was similarly well-received when released in 2008. The musical is based on Jung’s experiences in Sariwon labor camp, which he escaped before fleeing to the South.

Jung had actually begun work on “Ryanggangdo Children” in 2003 but faced a number of setbacks, mostly financial, that halted production at various times in the ensuing years.

Casting was also a problem, as they needed to find children who looked and sounded the part.

“Our biggest concern was that none of the children looked like North Korean children at all,” Jung said.

Not only would they need to look undernourished, but they also needed to look like they’d spent time outdoors, he said. “Their complexions were far from dark. So I encouraged them to have fun catching fish and harvesting potatoes and corn before the shoot.

“We also had them use North Korean accents even when they weren’t in front of the cameras and those who didn’t had to pay a 1,000 won fine.”

The biggest obstacle was the aging process. When production began, the 30 child actors were between 11 and 13. By the time filming wrapped two years later, they were all in high school and college.

Once filming was complete, first-time South Korean filmmaker Kim Sung-hoon, who shares the directing credit with Jung, was brought in to help with postproduction.

“Filmmakers in South Korea don’t usually want their territory invaded by someone else, but I was open to working with Kim,” Jung said. “If you look at films made by the Coen brothers, the synergy between the two is great. I expected the same [from Kim].”

Although expectations for the film are similarly high, some critics who have seen previews of it have criticized it for its lack of a political viewpoint, especially because it comes from an artist like Jung who has never been shy about airing his political views through his art. In addition to his musical about the North Korean gulag, Jung achieved cult status last year for uploading rap songs to YouTube that criticize North Korean leader Kim Jong-il and the country’s hereditary system of power.

But Jung insists that the film does have a point.

“I tried to deliver my message by placing animals in the film,” Jung said, explaining that the chickens and dogs in the film are symbolic.

“My message was that adults [whether they are North or South Koreans] are worse than animals,” he said. “Because of ideology, the sad reality is that adults put these children into difficult situations.”

When asked about his ultimate goal, Jung says he wants to keep producing cultural products that show the true face of North Korea, regardless of politics or ideology.