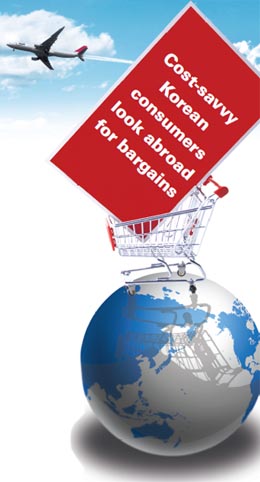 The stay-at-home mom said she saved 70 percent on the cost of three pairs of New Balance sneakers by purchasing them from an American e-commerce site.

She has never lived overseas and has a basic command of English, but that has not prevented her from becoming a global bargain hunter from the comfort of her living room.

After agonizing over the huge price differences that exist in baby products sold in Korea compared to those sold overseas, Seo said she started to purchase baby goods abroad. She has since expanded the bargain-hunting to include everyday products from leather shoes for her to dress shirts for her husband.

Although many of Seo’s favorite brands have authorized Korean sellers, she became a global shopper because she thinks imports are heavily marked up by the time they hit Korean stores.

There are a couple American shopping days Seo said she can’t miss out on, such as Black Friday (the day after Thanksgiving), because of irresistibly lower prices.

Korean department stores do have regular season-end sales, but consumers like Seo complain that the discounted products are still too expensive.

The prices of many imported goods are significantly higher in Korea than they are overseas. A bottle of GNC’s 400 microgram folic acid tablets sells for $2.99 on one American online retailer, while the same product is priced at 17,000 won here.

Korean retailers, of course, have reasons for charging higher prices. They say they take into account duties, labor costs and real estate rental fees. Korean consumers don’t buy it. They say those costs are also borne by retailers in other countries.

“Some probably doubt the cost advantages of purchasing products overseas, assuming they’d be more expensive than buying them from Korean authorized sellers. But this is not the case. Recently, I purchased a pair of shoes from overseas for 60,000 won - including international shipping. But those shoes were sold for 100,000 won here,” said Seo.

The 37-year-old runs a popular blog on which she shares tips on direct-purchasing from overseas. About 1,800 people visit her blog daily on average to look for promotional codes and read up on useful English expressions.

The nation’s logistics companies say they have seen an increase in international parcels delivered to Korea in recent years.

According to Hyundai Logiem Co., 58,000 international parcels are shipped to Korea every month on average, but that number soars to 80,000 on special occasions. “In months with seasonal shopping days, the number of parcels we handle increases by 40 percent. They are all ordered by individual shoppers,” said Park Byung-joon, a public relations vice team head for the company. “We noticed this new shopping trend for the first time, I guess, in 2005.”

Korea Customs Service told the Korea JoongAng Daily that it did not track the number of parcels processed from overseas before 2007.

An updated customs law in 2004 played a role in encouraging international shopping. The revision - intended to promote e-commerce - made parcels worth less than 150,000 won exempt from import duties.

The rising number of global shoppers in Korea has inspired niche services. Companies have sprung up to facilitate international purchasing for Korean shoppers who face obstacles trying to get their purchases delivered here. Because many global brands such as Carter’s, Nike and Ralph Lauren do not ship to Korea or do not accept Korean credit cards, companies exist to get around those restrictions - for a price.

Malltail and amoo21 are two such firms. They allow Korean consumers to get around U.S.-only delivery policies by allowing people in Korea to use the address of their American warehouses for deliveries, which they will then forward to Korea. For companies that do not process Korean credit cards, Malltail and amoo21 make purchases for Koreans with their credit cards.

“The service was launched to address demand from street-smart consumers who want to purchase from overseas, but can’t do so because of shipping and payment obstacles,” said Yu Ju-hyun from the public relations office of Malltail, one of the biggest companies providing such services.

Most companies specialize in American e-commerce, but Malltail offers delivery and payment services for orders placed in China and Japan as well. Its parent company, MakenshopNCompany Inc., is an IT firm specializing in designing online shopping malls. The company identified potential in the global shopping market and entered the industry in August 2009.

Yu said the company would not reveal its revenue from global e-commerce services, but he said the outlook for the industry is bright.

“Everyone wants to be special. For this reason, [Korean] IT fanatics use us to order the latest IT gadgets that are not available in Korea, and mothers purchase baby products usually sold at higher prices [in Korea]. The prices are far lower [overseas]. This is not a passing fad - but a new trend, I think,” Yu added.

Competition in this new niche market is tough. Besides established companies like Malltail, there are many one-person companies, usually run by Korean-American housewives or Korean students overseas. They are mostly located in New Jersey and Oregon, where no taxes are imposed on clothing.

The first steps to becoming a global shopper are to study the sales tax structures of different countries. Sales tax varies from state to state in the U.S.

U.S.-based children’s clothing brand Gymboree ships its products to Korea, but standard international shipping fees start from $30. That is cut in half when placing orders through Malltail or other similar companies.

Rising prices of imports have been criticized by civic groups and governmental organizations.

Most recently, the state-run Korea Consumer Agency reported in December that prices of imported children’s clothing, strollers and cosmetics were too high when compared to prices of the same products overseas.

“Each brand is imported through a single authorized distributor. Since there is no price competition, prices are high,” Lee Sang-sik, a researcher at the KCA, said in a release. The KCA added that lowering import tariffs imposed by the government on strollers, children’s clothing and cosmetics would have a limited effect, as taxes alone do not account for the entire price difference.

Industry experts also point to Korea’s distribution system as another cause of high prices here.

“Prices, especially for clothing, are bound to be more expensive [in Korea] because of the way they are sold,” said Ju Sang-ho, a managing director at Korea Fashion Association. Ju explained that Korean clothing brands have limited sales channels, making them highly dependent on department stores. “Few small- and medium-size companies want to take the risk of renting an expensive real estate in the middle of downtown.

“Instead, they prefer to sell their products at department stores where they shell out between 30 and 35 percent of their sales as commissions, which inflates prices,” Ju said.

North American and European department stores have slightly more economical systems. They purchase products from brands and then directly sell them to consumers.

“All Korean department stores demand commissions from brands except NC Department Store, which is run by E-Land Group. The department store purchases about 50 percent of its merchandise,” which Ju explained reduces producer-to-consumer costs.

The savings allow NC Department Store to pass the savings on to consumers. It sells imported brands for 20 to 30 percent cheaper than competing department stores.

Last year’s opening of NC Department Store was named by market watchers as one of the most significant events in the country’s fashion industry last year.

Experts say that the country’s major retailers cannot afford to ignore global shoppers, lest they lose more of their market share to overseas distributors and middlemen.

Today’s cost-savvy Korean consumers are more global-minded than ever; they have a better command of English, Chinese and Japanese than previous generations, and their ranks will only grow in the coming years.

“They also attempt to get what they want no matter how hard it is. [The retail industry] must take notice of these powerful consumers.”