The pitfalls of our ‘hurry-up’ culture

The pitfalls of our ‘hurry-up’ culture 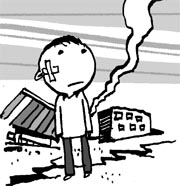 France, the United Kingdom and Germany are often cited when people talk about differences in national character. French historian Jules Michelet summed it up like this: “The French put priority on individuals, the British on the empire and the Germans on the nation.” Here’s another one: “The French run first and think later; the Germans think first and run later; and the British think while they walk.” The French incited a historical event such as the French Revolution first and then addressed their problems later. As seen through the two world wars, the Germans first establish and then go for their goals. The British, however, accumulate experience and then act with prudence.

Another joke? The United Nations held an event to allow member countries to introduce the national character of their people. The French representative made a long and tedious speech on the artistic character of its people; the British gave a lengthy explanation on gentlemanship; and the German representative spoke of diligence. In the middle of a speech, a Korean popped up and said, “Hey, let’s finish the speeches quickly and go back to our seats.” It’s a witty portrayal of Korean impatience.

A nation’s character is formed by an accumulation of values, behavior and the traits that people in a country share. Since each country’s culture is different, it’s not possible to tell what’s better. In his book “A Study of History,” British historian Arnold Toynbee said that the decline of a society or the fall of a civilization is not caused by outside factors, but by internal elements. A great country, he said, arises from “the sincerity and unity of the people.”

The whole world is surprised again at Japan’s meiwaku culture in the face of a massive disaster. Its national character of refraining from inconveniencing others is expressed in the way the people are keeping order and maintaining self-control in a tragic situation. We have seen the Japanese attitude that you should respect others’ freedoms and rights if you want to claim yours. It is very different from the attitude of Koreans, which often goes to extremes.

I cannot but bow to the insight of Lao Tzu, who said Mother Nature is not generous to humans. He said we are nothing but feeble creatures in the face of nature. No one knows when a colossal disaster will befall us, too. Would we be able to overcome such a tragic situation with our “hurry-up” culture? I hope we will be able to prove ourselves in a time of tremendous crisis.