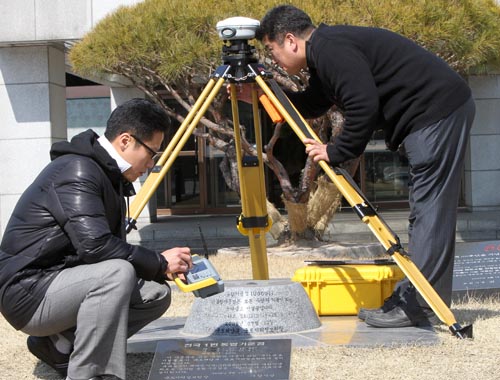 Officials from the Suwon city government check GPS readings in front of Suwon City Hall, Gyeonggi, yesterday. The Korea Astronomy and Space Science Institute announced Wednesday that since the earthquake in Japan, the Korean Peninsula has moved between one and five centimeters (two inches) east. The institute said Ulleung Island and the Dokdo Islets, which are located closer to the epicenter of last Friday’s quake, moved more than other parts of Korea. Experts say a portion of the Pacific plate moving west pushed under the North American plate, which Japan is on. [YONHAP]