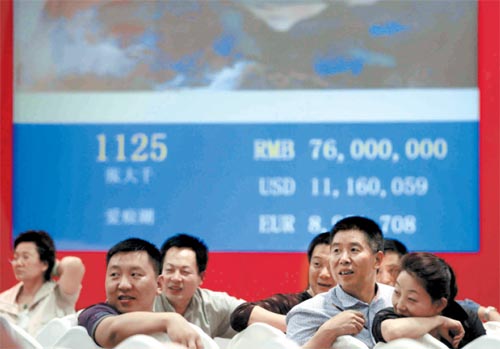 The bids for a large-scale 1968 painting “Aachensee Lake” by China’s modern artist Zhang Daqian (1899-1983) go on at China Guardian’s Spring Auction in Beijing in May 2010. The painting fetched 100.8 million yuan (14.76 million dollars at that time). Provided by China Guardian

“The Global Art Market in 2010: Crisis and Recovery” underlined what auction houses and consigners had seen throughout last year - a sharp rise in the number of wealthy Chinese buyers, and, with them, prices.

The report, commissioned by the European Fine Art Foundation, estimated the value of the global art and antiques market in 2010 at 43 billion euros ($60 billion), up 52 percent from 2009 when values slumped as a result of the financial crisis.

“The period from 2008 through 2010 has been one of crisis and recovery for the market for art and antiques,” said the report, released on Monday.

“Luxury spending contracted sharply in many countries during 2009, however 2010 brought the first signs of economic recovery with a rebound in consumer confidence and with Chinese consumers driving growth in many luxury sectors.”

The report highlighted concerns in Britain that an EU art tax due to be imposed in 2012 could further damage the country’s ability to cope with increasing competition from abroad.

An EU levy on the sale of works by living artists was introduced in the United Kingdom in 2006, and, according to the British Art Market Federation, was a “significant factor” behind the country’s declining share of the contemporary art market.

Under European Commission plans, in 2012 this levy is due to extend in the U.K. to sales of works by artists who have died within the last 70 years, affecting auction favorites like Pablo Picasso and Alberto Giacometti.

Anthony Browne, chairman of the British Art Market Federation, called on the government to take “firm action” in Brussels to ensure fair competition.

“The EU alone applies this levy - it does not exist in China, the United States or Switzerland, our main global competitors,” said Browne.

“Unfortunately for us, the EU put the cart before the horse. It should have secured a global agreement .?.?. before going it alone and introducing this surcharge in Europe,” he added.

The art market report calculated the cost of sending works to non-EU markets for sale to avoid the levy, and found that it would be worthwhile for a vendor to send any work worth 40,000 euros or more to New York.

The report also said the value of China’s art market nearly doubled in 2010, and that its share of the global business hit 23 percent last year, overtaking Britain’s 22 percent.

That is still some way ahead of the next largest European market, France, which accounted for six percent. The U.S. remains the world leader with a 34 percent share.

According to the study, dealers generated 51 percent of sales in global art versus 49 percent generated by auction houses. Traditional street galleries, it added, were in decline.