Our fate is blowing in the wind

Our fate is blowing in the wind 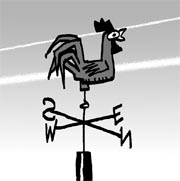 The direction of the wind has often had a great impact on human history. Regardless of time or place, changes in wind patterns have played a decisive role in battles. The commander who reads and takes advantage of the wind’s direction may win a battle, but if he fails to use the wind, his army may suffer a devastating defeat.

In 1018, Liao General Xiao Biaya led 100,000 Khitan troops to invade Goryeo (918?1392). Before the Khitan army arrived, Goryeo General Gang Gam-chan set up camp in a field along their path. General Gang must have predicted a shift in the wind. According to “Short History of Goryeo,” the wind’s direction changed suddenly as General Gang began an attack, showering the enemy with arrows. The Khitan army’s arrows went upwind and failed to reach the Goryeo camp. Only a few thousand Khitan soldiers survived in the famous Battle of Gwiju.

Ban Ki-seong, author of “Amazing World History Changed by Weather,” wrote that wind direction helped prevent a third World War. In 1962, after the Cuban missile crisis, tensions between the United States and the Soviet Union were high. Soviet Communist Party Secretary Nikita Khrushchev considered a nuclear attack on Western Europe but abandoned the plan after consulting scientists. Because of the Coriolis force, air travels from west to east on the Earth’s surface in the Northern Hemisphere. Therefore, radioactivity from a nuclear weapon dropped on Western Europe would travel east toward Moscow and Kiev within a day.

The nuclear power plant crisis in eastern Japan is escalating. Along with the release of radioactive materials from the nuclear reactors destroyed by the tsunami, wind direction is the key to the development of the situation. In Japan, local weather reports give the direction of the wind before providing information on temperature or precipitation. The westerly wind over the Korean Peninsula is acting as a barrier to keep radiation away. But we must keep a close eye on wind patterns. It is truly tragic that the fate of Japan and the world now depends on the direction of the wind.