Seoul is cautious about evacuations

Seoul is cautious about evacuations 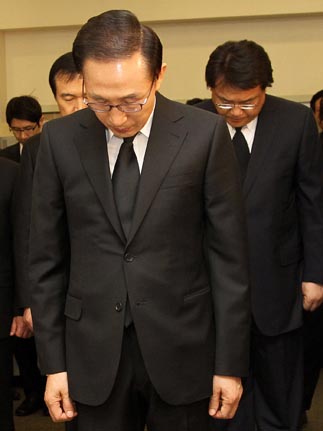 President Lee Myung-bak expresses his condolences at the Japanese Embassy in Seoul. By Ahn Seong-sik

The Korean government said it will send military aircraft and boats to evacuate Koreans from Japan if the country’s nuclear crisis worsens, while remaining cautious about when to proceed with the withdrawal.

“The government has readied plans to cope with various scenarios,” said Second Vice Foreign Minister Min Dong-seok. “If the crisis worsens, we have a plan to evacuate Koreans by sending all available military aircraft and maritime police boats.”

Min, however, refused to specify how the government will decide to order an official evacuation. “We have our own alert system and appropriate measures will be taken without a delay,” he said, adding that an assessment will not be made emotionally.

The government has already warned Koreans to evacuate from the vicinity of the nuclear plant in Fukushima Prefecture.

In a press briefing later in the day, Min advised Koreans who are living outside the 80-kilometer-radius to move further away until the situation improves.

“To make the return to Korea easy, the Transportation Ministry will consult with airlines to increase the number of flights from Japan,” Min said.

While several countries have urged their citizens to leave the country and sent government-chartered flights, Korea has been more reserved in its talk about evacuation due to diplomatic sensitivities. Unlike other countries, whose nationals are visitors or short-term residents in Japan, Korea has about 580,000 permanent residents in the country.

“Japan is a friendly neighbor in the closest proximity and we must wholeheartedly be responsive to its troubles,” Min said. “We are doing our best to make careful decisions while protecting our people’s safety.”

According to Min, the consulate in Sendai received inquiries about 963 Koreans and 730 of them were confirmed to be safe; 231 Koreans are missing and one was confirmed dead.

President Lee Myung-bak yesterday visited the Japanese Embassy in Seoul to express his condolences for the earthquake victims and expressed Korea’s support for the disaster-hit nation.

Lee also hosted a meeting yesterday with ministers and nuclear experts, and ordered all nuclear reactors in Korea be thoroughly inspected. The discussion was largely focused on the fallout from the crisis at Japan’s nuclear plant, Blue House spokeswoman Kim Hee-jung said.

Korea has 21 nuclear reactors and the Blue House said yesterday that they were designed to be safe from earthquakes, tsunamis and electricity disruptions. Nine of the 21 reactors have been in operation for more than 20 years and they will received top priority in the inspections, Kim said.

Stressing that Korea has had a very solid safety record for its 21 reactors, Kim said only a handful of minor incidents have been reported in Korea.