Nadal and Djokovic to meet in BNP final

Nadal and Djokovic to meet in BNP final 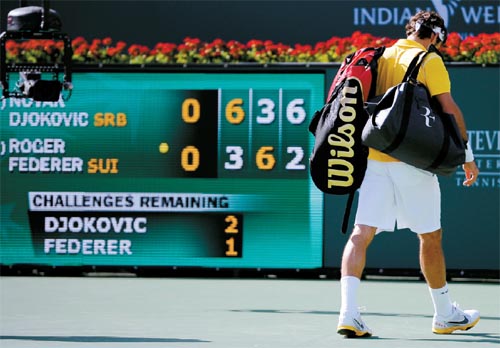 Roger Federer walks off the court after losing to Novak Djokovic in their semifinal match at the BNP Paribas Open tennis tournament, Saturday, in Indian Wells, Calif. [AP/YONHAP]


INDIAN WELLS, Calif. - Australian Open champion Novak Djokovic outlasted Roger Federer 6-3, 3-6, 6-2 to stay undefeated this season and reach the BNP Paribas Open final. To add insult to injury, Djokovic simultaneously knocked the Swiss star from the No. 2 spot in the world on Saturday.

Djokovic and Federer will switch spots when the rankings are updated on Monday, with the Serbian moving up to No. 2 and Federer slipping to third with an 18-3 mark this season.

All three of his losses have been against Djokovic, who is 17-0.

Nadal rallied from a 3-0 deficit in the first set to beat Juan Martin del Potro 6-4, 6-4, ending a three-match losing streak to him.

It was the third time in 25 years at Indian Wells that the world’s top three men reached the semifinals.

Federer became just the fourth player to take a set off Djokovic this year when he won the second after losing to him in straight sets in the Australian Open semifinals and in the Dubai final this year.

Djokovic broke Federer to open the third set, then staved off two break points and hit a forehand winner that kissed the sideline to hold for 2-0.

Federer broke back when Djokovic double-faulted at love-40 to tie the set at 2-2. Federer then double-faulted to lose the next game and the Serb won the final four games to close out the win.

Djokovic reeled off 11 straight points in that period, breaking Federer’s serve once more with a forehand winner in the corner.

With Djokovic serving on his second match point, Federer sent his forehand return long. Djokovic pounded his chest with his right fist, delighting his Serbian flag-waving female fans who screamed for him.

Nadal needed a third-set tiebreaker to beat Ivo Karlovic in the quarterfinals and he started out slowly against Del Potro on a mostly cloudy day in the desert, with the temperature dipping to 70 degrees Fahrenheit, 20 degrees cooler than earlier in the week.

Nadal got broken on his forehand error in the second game and Del Potro held on for a 3-0 lead.

Del Potro held again and took a 4-1 lead before Nadal won the final five games, including an ace down the middle in the 10th game that gave him the first set.

“After that, I started to put more balls inside, play higher to his backhand and trying to get the right rhythm,” Nadal said.

“I did well. I played a few good games. He made a few more mistakes than usual. That helped me a little bit.”