Yellow dust from China found to be radioactive

Yellow dust from China found to be radioactive 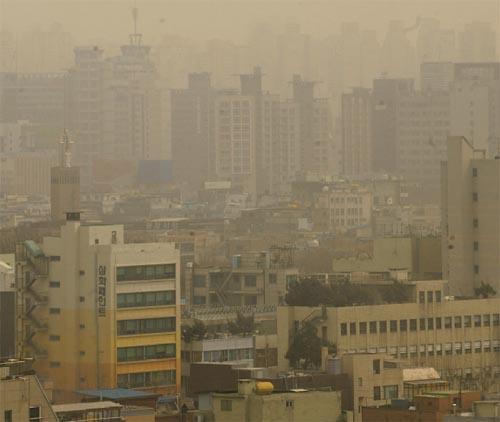 A blanket of yellow dust from China covered Seoul for more than two hours Saturday. [NEWSIS]


Yellow dust blowing over Korea from China every year is believed to contain radioactive material presumed to have been leaked from nuclear power plants in the neighboring country, a state think tank said yesterday.

Small amounts of cesium-137, a highly radioactive material, have been detected in Korea’s air and soil between February and April - when the dust gets most serious - over the past 10 years, the Korea Institute of Nuclear Safety said in a report submitted to an opposition lawmaker.

Yellow dust - fine sand blown from the Gobi Desert in China and Mongolia every spring that sometimes includes toxic chemical smog emitted by Chinese factories - can cause respiratory disorders.

On Saturday, Korea was put under the first yellow dust advisory of the year.

Because the substance mostly is a product of artificial nuclear fission, it usually does not occur in nature to any significant degree until nuclear weapons testing begins.

A cesium concentration of more than 50,000 becquerels per cubic meter is considered harmful to the human body.