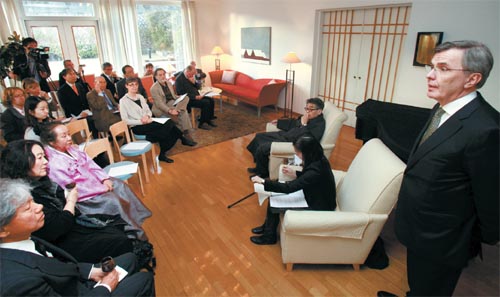 Lars Vargo, the Swedish ambassador to Korea, right, introduces Korean poet and activist Kim Ji-ha, seated at right, to members of the Seoul Literary Society on March 15 at the ambassador’s residence in Seongbuk-dong, northeast Seoul. Kim read four of his poems in Korean, which were then interpreted into English for the approximately 40 members of the society who were present. By Lee Chan-weon


The Seoul Literary Society carried on its tradition of hosting readings with famous Korean and foreign writers at a gathering on March 15 at the residence of Lars Vargo, the Swedish Ambassador in Korea, in Seongbuk-dong, Seoul.

The guest of honor that evening was Kim Ji-ha, a poet-activist who became famous for the poems he wrote in protest against the dictatorial governments of the 1960s and 70s.

Vargo, who is well-known for his love of literature, had translated Kim’s poems into Swedish and later had them published in Sweden.

“When I was a student at Kyoto University in Japan, I read three of Kim’s poems in Japanese and translated three of his poems into Swedish - without his permission, which I apologize for,” the ambassador said in a recent interview with the Korea JoongAng Daily.

The ambassador founded the Seoul Literary Society when he came to Korea in 2006 with a group of like-minded foreign ambassadors. Together, they began to host gatherings with Korean and foreign writers, who would share their ideas about literature.

Today, most of the members are ambassadors in Korea, and meetings are held two or three times a year.

“The reason why I founded this society was because I thought the best way to understand a country was to learn its literature,” Vargo said. “We have invited many prominent Korean writers to meet with us, such as Gong Ji-yeong and Park Wan-suh, who has recently passed away.”

At the society’s 23rd meeting, Kim recited four of his poems in Korean: “At the Place in Hojo where Haewol was Arrested,” “Longitude,” “Love’s Seven Feelings” and “Tears Well.”

The poems were interpreted into English by two interpreters engaged by the society.

Kim is known for his active participation in politics. He was imprisoned in 1970 for violating the Anti-Communist Law after he wrote the poem “Ojeok,” or “Five Thieves,” in which he criticized corrupt high-profile government officials and conglomerates. He visited Sweden in 2009 to attend an international academic forum at Stockholm University.

He gained international recognition for his work when he was awarded the Lotus Prize in 1981, which is considered the Nobel Prize in Literature for writers from Asia and Africa.