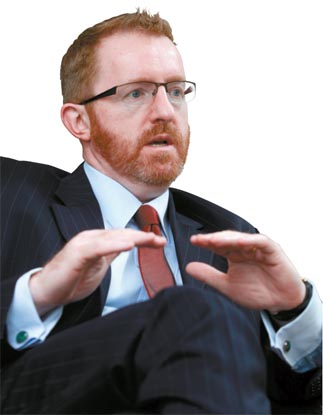 This year’s St. Patrick’s Day event in Seoul, held in Insa-dong on Saturday, was without the usual fanfare that had turned the trademark Irish celebration into a major event for expats in Korea for the past several years.

There was no parade (which had been the main part of the event), the number of participants had decreased and the venue had changed from the Cheonggye Stream area to a much smaller locale in Insa-dong. Media coverage of the event had also diminished.

Although there were concerns that the changes to the event reflected the financial difficulties facing Ireland, Eamonn McKee, the Irish ambassador to Seoul, said there was no connection between the event and the condition of the Irish economy or the Irish community in Korea.

“The creation of a St. Patrick’s Day event is always a challenge for a relatively small community like ours,” McKee said in an interview at the Irish Embassy in Susong-dong, central Seoul, last week.

The Irish Association of Korea, created by and for hundreds of Irish expats in Korea, has hosted the annual event since 2001 in Seoul. Over the years it has grown, with the number of participants reaching 18,000 in 2008.

Last Saturday’s event, however, drew little media coverage and thousands of fewer attendees, partly due to the venue change and a lack of corporate sponsorship, according to an association official.

The ambassador called it a “difference” rather than a “decrease.”

He said the Irish community in Korea is prospering, evidence of which is reflected in the major events the community is planning for later in the year.

The Seoul Gaels, a Seoul-based traditional Gaelic football club, will host the Asian Gaelic Games in Suwon in October. About 700 to 800 Gaelic players from many parts of Asia will come to Korea to attend the event, McKee said.

In the same month, the Asia-Pacific Irish Business Forum, a gathering of Irish business people interested in the region, will also be held in Seoul.

“I think both of the major events later this year stand as a testament to the strength of the Irish community here,” the ambassador said.

Since opening diplomatic ties in 1983, Ireland and Korea have gradually become closer.

Economically, Korea’s rapid transition from a war-stricken country in the 1970s earned it a nickname as an Asian Tiger. Similarly, Ireland was called a Celtic Tiger through its economic development that continued as late as the early 2000s.

The reputation of the Irish economy as a European hub, however, suffered a serious setback amid the global financial crisis a few years ago, highlighted by the 85 billion euro ($120 billion) bailout by the International Monetary Fund and the European Union in November last year.

The ambassador said that Ireland, now under new leadership, is putting its full energy into orchestrating an economic recovery. The new ruling party, Fine Gael, which brought the Fianna Fail party’s 85-year-long rule to an end in an election in February, is confident it will be able to turn the country around ahead of the 100th anniversary of Ireland’s independence from Britain in 2016, McKee said.

He said there are lessons for Ireland in Korea’s overcoming of the Asian financial crisis.

“Korea has been an example of the quicker, the harsher measure you take, the quicker you get out of it,” he said. “That’s what we are doing in Ireland with an austere budget. We are looking to reduce our deficit to 3 percent by 2015.”

Ireland also has a bright outlook on its relationship with Britain, the ambassador said. In May, Britain’s Queen Elizabeth is scheduled to visit Ireland, marking the first visit by a British monarch to the country since Ireland’s independence.

McKee said the same kind of progress can be made between Korea and Japan on the back of bilateral efforts, like the help Korea has provided to Japan after the earthquake on March 11.

“Our histories have been intertwined, sometimes tragically, but ultimately that creates a relationship that can be converted into very deep bonds between people,” he said. “That seems paradoxical, but it is true.”

McKee said Korea, which is bidding to play a larger role in the international community, can make good use of its nationalism - just as Ireland has done with its strong sense of identity and openness.

“I think that the mixture of a self-confident identity and openness allows us to be both very Irish and very international, and there is no reason why Koreans can’t do the same,” he said.