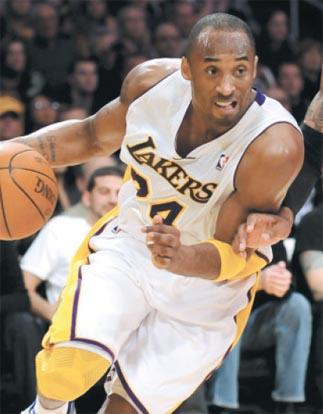 Los Angeles Lakers guard Kobe Bryant drives to the basket in the second half against Portland, Sunday, in Los Angeles. [AP/YONHAP]

LOS ANGELES - Kobe Bryant scored 10 of his 22 points in the fourth quarter as the Los Angeles Lakers rallied to beat the Portland Trail Blazers 84-80 in the NBA on Sunday for their 12th win in 13 games.

Derek Fisher had back-to-back steals to put the Lakers ahead in the final three minutes before hitting a clinching jumper with 10 seconds left. The Lakers played without starting center Andrew Bynum, who was suspended for two games on Sunday for a flagrant foul on Minnesota’s Michael Beasley two days earlier.

Nicolas Batum scored 22 of his 25 points in the first three quarters for the Blazers, whose three-game winning streak was stopped. Portland scored just 14 points in the fourth quarter on 5-for-18 shooting.

Meanwhile, the Houston Rockets nudged past Utah in the battle for the final playoff spot in the Western Conference with a tense 110-108 victory over the Jazz on Sunday.

The Rockets claimed their 11th win in the last 14 games to move half a game in front of the Jazz and within one and half games of the Memphis Grizzlies for the eighth and last postseason position.

Kyle Lowry recorded a triple-double of 28 points, 11 rebounds and 10 assists for Houston, while the Rockets held off a late rally from the Jazz. “Right now he’s playing great, not only from a statistical standpoint, but [also] from a leader standpoint,” teammate Chuck Hayes told reporters. “He’s our floor general.”

Kevin Martin scored a team-high 34 points and made all 18 of his free-throw attempts.

The Rockets scored their last 13 points from the free throw line, including six by Martin, while Lowry made two with just under seven seconds remaining to give the Rockets a four-point buffer. Raja Bell made a layup as time expired for Utah, which received some strong performances in a losing effort.

Paul Millsap returned from a five-game absence brought on by knee tendonitis and put up 35 points and 10 rebounds for the Jazz (36-34) who lost for the third time in their last five games. Millsap made two successive 3-pointers in the final minute to pull Utah within three points but the Rockets (37-34) clinched the game at the free throw line.

C.J. Miles had 19 points while Al Jefferson recorded 17 points and 19 rebounds for the Jazz, who have struggled to a record of 5-11 since coach Jerry Sloan resigned last month.

Houston, however, has picked up momentum in the last month, including a 16-point victory over the Boston Celtics last Friday.