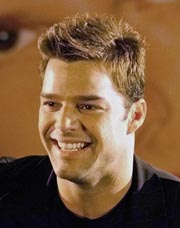 NEW YORK - Latin pop star Ricky Martin was honored by media group GLAAD for his work as a role model at a gala held on Saturday where he urged people to spread gay rights in Latin America.

“I just want to be free. I can say, today I am free,” the Puerto Rican singer said at New York’s Gay and Lesbian Alliance Against Defamation (GLAAD) Media Awards, which recognize the best portrayals of gay community members in film, television, radio, music, newspapers and blogs.

Martin, the 39 year-old singer of hits such as his 1999 single “Livin’ la Vida Loca,” who has sold more than 60 million albums worldwide, revealed he was gay in 2010 after more than a decade in the international spotlight.