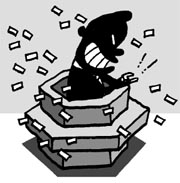 Multinational forces have finally launched a military operation against Libyan dictator Muammar el-Qaddafi. The international forces, led by French Rafale fighter planes, launched a barrage of Tomahawk missiles at air defense bases in Tripoli. The name of the operation, Odyssey Dawn “has absolutely no meaning” according to a spokesman at the U.S. Africa Command.

Of all past military operations, the Normandy Invasion, code-named Overlord, was the largest in history. At midnight on June 6, 1944, allied forces under the command of U.S. Gen. Dwight D. Eisenhower, then Supreme Commander of the Allied Forces in Europe, invaded the beaches of Normandy, northern France. The aim was to establish a foothold for their offensives against the German forces. With their success came a decisive chance for victory.

Admiral Yi Sun-shin, who saved Korea from Japanese invasion in 1592, was victorious in a historic battle near Hansan Island. He induced the enemy fleet to the sea with a small number of warships and crushed them with a battle formation called “hak-ik-jin,” named after the shape of a crane’s wing. In the formation, his warships first stand abreast facing the enemy. But when the enemy attacks, the warships in the center of the line retreat while those on both sides move forward to encircle and defeat the enemy.

The word “operation,” which has become a popular military term, often appears in stock market news nowadays. There are similarities in the movement of the military and the stock market.

Planning and confidentiality are essential for success. Players form alliances with friendly forces and establish plans for leaking false information, which can include the timing and contents of the leak, to manipulate stock prices before implementing their plans. Deutsche Securities, a global brokerage company, was caught red-handed in November last year trying to take 44.8 billion won ($40 million) through a high-handed operation called “option shock.” Several days ago, Koo Bon-hyeon, LG chairman Koo Bon-moo’s cousin, was arrested on charges of gaining 10 billion won by manipulating his company’s share prices. But perhaps because of the lukewarm punishments that are normally doled out in these situations, market operations such as these never stop.

Would the manipulators be terrified if they were called into the army for an actual military operation?