The hope of finding missing kids

The hope of finding missing kids 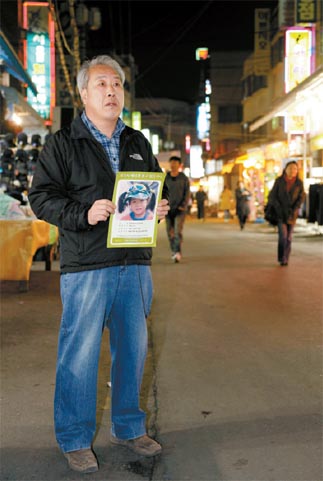 Jo Byeong-se, whose daughter has been missing for 16 years, holds up a picture of her at Guro Market in Seoul, where she was last seen. By Choi Dae-woong

Six-year-old Jo Ha-neul was playing with friends on the evening of June 16, 1995, just outside her home in Guro, western Seoul, while her mother was inside, busy packing for a move to another neighborhood.

“When Ha-neul came back home around dinnertime,” remembers her father, Jo Byeong-se, “my wife handed her some deep-fried shrimp and told her to stay put for a while as dinner wasn’t ready yet. Ha-neul left the house without telling her mother and she hasn’t been seen since.”

Jo’s company was understanding of his plight at first, allowing him to take time off to search for his daughter, but after a while, they became less so. “So I left work and searched for her full time,” he said.

Jo’s wife is haunted by the loss and suffers severe social phobia, Jo said. “So many people called saying they had spotted my daughter, so my wife was full of hope. But when turned out not to be true, our sense of loss grew,” Jo said.

One time, Jo went all the way to Mokpo, North Jeolla, to investigate a lead and found out that it was a prank call. “When I tracked the informer down, he casually said that it was just a joke.”

Jo, who eventually found another job, still searches during his free time.

And what has become of his wife? “She blames herself, saying that it is her fault that such misfortune befell her daughter,” Jo said.

Such sad, desperate cases are what make Na Ju-bong, the head of the National Organization of Finding Missing Children and Family, try as hard as he can to find missing children and help their devastated families. “How can you ignore such desperate efforts from the parents?” Na said recently.

Despite having around 100 members, with half of the members being the parents of missing children, the organization’s office is headquartered in a cramped container box next to Cheongnyangni Station, northeastern Seoul, an obvious sign of its lack of financial backing.

The organization is affiliated with the National Police Agency and receives up to 3 million won ($2,700) annually from the agency.

But the group barely makes ends meet, as that money alone is not enough to cover even the cost of printing leaflets.

Na pays for the electricity and other expenses from his own pocket, with the help of his wife, who sells clothes at a vendor next door. Despite their lack of money, however, Na and his colleagues press on in their efforts. Na said they have helped about 500 children reunite with their parents.

Stacks of fliers with the faces of missing children fill one third of the office space, barely allowing room for a desk.

“I am the only one who stays here and I do most of the work. I also gather members when we have press conferences,” said Na, who has worked tirelessly for 20 years.

Na is motivated in part by his own story. His brother went missing years ago, and Na, who had been a street vendor, abandoned his business and went off on a desperate search with only a single picture in hand. He found his brother after four years.

His next job venture - working as a busker, singing on the street and selling cassettes of his music - led him to have even more passion about missing children.

In March 1991, while he was doing one street performance, five men were handing out fliers with pictures and descriptions of their five sons who had gone missing. It was the case of the “frog boys.”

“Hundreds of people were gathered to see my performance and hardly anyone was willing to receive the fliers,” said Na. “I knew how devastated they must have been, so I decided to help them hand the fliers out. Ever since then, I’ve devoted myself to doing everything I can for missing children,” he added.

The frog boys case involved five boys in Daegu who had gone out to nearby Waryong Mountain on a frog-catching expedition and never returned.

Their bodies were found 11 years later; they had been brutally murdered. No one was ever charged in the case, which is now closed, and the statute of limitations on the case was lifted in March 2006. The missing child group believes there should be no time limit set on prosecuting such horrendous crimes.

“It’s the only way to solve [these] crimes,” Woo Jong-u, the father of one of the frog boys, said in a statement. “Crimes against humanity should not be forgiven. The criminals should be purged of their inhumane sin and it’s only possible by abolishing the statute of limitations.”

The country’s statute of limitations for serious crimes was 15 years until December 2007, when it was extended to 25 years, thanks in part to efforts by Na’s organization.

Na’s group also works to encourage the authorities to enforce laws already on the books to help people with missing family members while at the same time working to prevent crimes against children.

The group helped get a law revised in 2005, raising the age from 8 to 14 when children can be registered with police as “missing” without having proof that a crime was committed.

Na said another important issue is the emotional support that family members need when a child goes missing.

“About 70 percent to 80 percent of the parents of missing children get divorced. They blame each other,” said Na. “Some even commit suicide.”