Artists work and play in this old house

Artists work and play in this old house 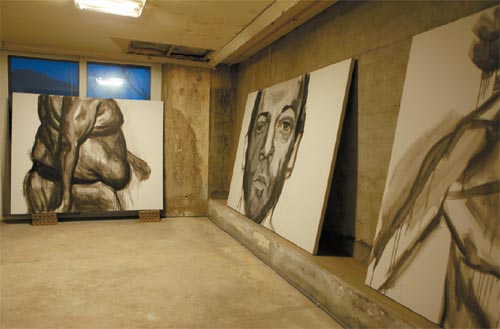 “Untitled” (2011) by Yoon Young Wan, acrylic on canvas, is part of the “NonameHouse” exhibition in Buam-dong, central Seoul. Provided by NonameHouse

When Ee Huna, a young artist who is co-planning and participating in the exhibition “NonameHouse,” asked fellow artist Cha Ji-ryang to join the show in an empty house scheduled for demolition, that was his first question, she said.

She told him that he could - on the condition that he light the fire on the roof on the last night of the exhibition after calling the fire station.

“Unlike in galleries, artists can do almost anything in this house,” Ee said. “That’s why we have decided to hold an art show here. The participants use the house not only as an exhibition space but also as material for their work.”

The house, located in Buam-dong at the foot of Mount Inwang in central Seoul, was built in 1970 and will be demolished by its new owner, who plans to build a new house, said participating artist Shin Min-kyung.

Prior to its destruction, the artists claimed the space for a show. A total of 13 artists including Ee, Shin and Cha, will show 15 works in various spaces in the old house.

Shin’s installation “In Between,” which lives on the second floor, is about the house’s future. The installation, which is based on the blueprint for the new house, is an exact replica of the new house’s bedroom, study and bathroom, built in exactly the same places where they will be situated in the new house. In this way, the installation shows the overlapping of the present and the future. 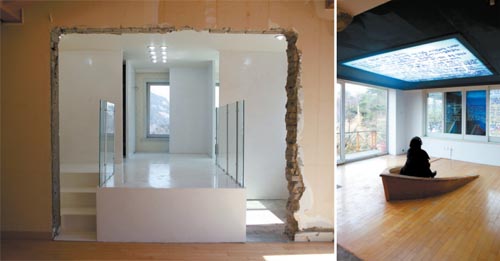 Shin Min-kyung’s installation “In Between,” left, and Ee Huna’s “Dan was Born on Second Sunday,” right, are also part of the “NonameHouse” exhibition.


The history of the house is dealt with in another installation by Yoon Ji-won and other four artists called “Untitled” that is shown in a big room on the first floor. Scattered around the floor are odds and ends, such as a bus token, toys and paintings, left by the families that once lived in the house. It also includes a video documenting the artists’ time in the empty house and the traces of their stay.

Yoon has another “Untitled” installation. Housed in the small, dark boiler room in the basement, the installation looks it could be the set of a horror movie and consists of lamps and light switches from the house.

Adding to the eerie environment in the basement is an exhibit of big monochrome paintings of human faces. These are not related to the old house, but the gloomy and desolate atmosphere they create match well with the space.

These are by Yoon Young-wan, who “does not like explaining his works and nor having them explained by others,” according to Ee and Shin. He has been a drummer and painter for the last seven years and seems to attach greater importance to the beat than to lyrics, they said.

Ee has an installation titled “Dan was Born on Second Sunday” in the living room on the first floor that she said was inspired by the big noises that the other artists made during the process of making and installing their works on the second floor.

The installation consists of various things ranging from a part of a ship, an MP3 player and headphones and some paragraphs of text written on a window and a light fixture on the ceiling. The text tells the story of a young brother and sister who hear their stepfather moving around on the second floor. Sitting on the boat, reading the text and listening to the music from the MP3 player evokes the horror and complicated emotions children go through.

*The exhibition runs through March 31. It is open from 12 to 8 p.m. Admission is free. Take green bus No. 1020 or 7212, get off at the Buam-dong Office stop and walk for five minutes. For details, go to www.facebook.com/nonamehouse or www.twitter.com/nonamehouse.