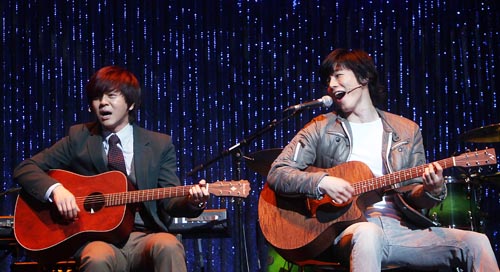 Sang-hoon (Yoon Do-hyun) and Hyun-woo (Kim Moo-yeol) sing together in a scene from the new musical “Gwanghwamun Younga,” which runs through April 10 at the Sejong Center for the Performing Arts. [YONHAP]


“Gwanghwamun Younga” seems like a musical only your mother could love. It has hit songs written by a songwriter who was popular in the 1980s and is set during the civil unrest of the same decade.

But when I went to see the new musical, which premiered Sunday, with my mother, who is a product of that generation, I was surprised to discover that I enjoyed it more than she did.

The songs were all composed by the late songwriter Lee Young-hoon, who died in 2008 after a battle with cancer at the age of 48 while he was working on the “Younga” script. It’s one of the few musicals in Korea with songs composed by a single person.

Despite its ’80s setting, the musical also has cross-generational appeal. 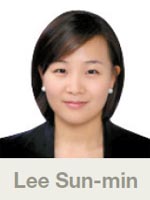 One of the songs, “Red Sunset,” will be familiar to young people because the remake was a hit for K-pop boy band Big Bang in 2008. The song will also be familiar to fans of the song’s original singer, Lee Moon Sae, a popular ballad singer in the 1980s who frequently collaborated with Lee Young-hoon. Young people know him through his appearance as a judge on season two of the popular reality talent show “Superstar K.”

The plot is a musical within a musical and follows the love triangle between Sang-hoon, a famous composer, Sang-hoon’s protege Hyun-woo and aspiring singer Yeo-ju.

Sang-hoon and Hyun-woo are regular performers in a lounge, where they meet Yeo-ju, who sings there one night. Upon hearing Yeo-ju sing, the two friends fall for her. Sang-hoon, too shy to pursue a romantic relationship with the songstress, asks her to perform his songs. She agrees but their relationship goes no further. Meanwhile, Hyun-woo, who is bolder, asks Yeo-ju out and the two fall in love.

Things change for the trio when one of Hyun-woo’s songs is used to incite protest. When the authorities find out he is the songwriter, he disappears for three to four years. In his absence, Sang-hoon and Yeo-ju grow closer and are on the verge of falling for each other, but when Hyun-woo returns suddenly one day, Yeo-ju goes back to Hyun-woo.

The story unfolds with two narrators - the present-day Sang-hoon and his student Ji-yong. We learn through them that Ji-yong has asked Sang-hoon for advice on a musical he is writing, which turns out to be the one we have been watching unfold on stage. When Sang-hoon grows suspicious about the plot, Ji-yong reveals that he is the son of Hyun-woo and Yeo-ju, though he never says what happened to his parents. Ji-yong has another surprise for Sang-hoon - a letter from his mother, who writes that she could have loved him if he had expressed his love for her those many years ago.

Although the plot sounds confusing, it wasn’t and the structure actually facilitated understanding.

For young people, the big draw will be the cast of celebrities. Two actors alternate in the role of Sang-hoon - actor Song Chang-ui, who gained fame after starring in the SBS drama “Life Is Beautiful” last year and the musical “The Sorrows of Young Werther,” and singer Yoon Do-hyun of Yoon Do Hyun Band. Ji-yong is played by Yang Yo-seob of the boy band Beast and Yeo-ju is played by Lisa, a K-pop singer who starred in the musical “Daejanggeum” in 2008.

Only Lisa was miscast. She is a terrific singer, but her voice is too powerful for the ingenue she plays.

Unlike most musicals of today, this one is carried mostly through song. Other musicals tend to rely too much on spoken dialogue and have musical numbers that are too short. But this one has a good balance between spoken and sung text. And Lee’s songs express the complicated feelings the characters go through - from elation to heartbreak and back.

The song “Red Sunset” is the main draw for people of my mother’s generation, but I wasn’t familiar with Lee the composer, nor did I know much of Lee Moon Sae’s music, so I had few expectations for either. If you’re like my mother, however, you may go expecting to hear ballads like the ones that made Lee Moon Sae famous. But that would be a mistake. The songs sound fresh and frame the musical well.