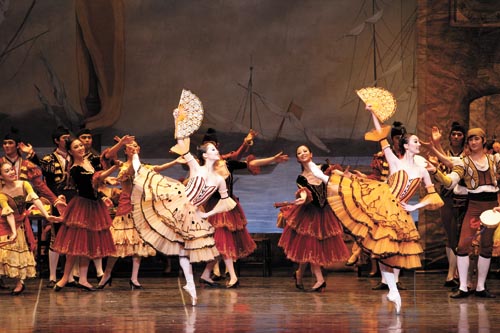 The program includes Mozart’s Violin Concerto No. 3 in G Major, Stravinsky’s “The Rite of Spring,” and Theofanidis’ “Muse.”

March 30: American pop and R&B singer-songwriter Ne-Yo has written and recorded a number of hit songs for himself and other artists. He returns to Korea to promote his new album “Libra Scale,” which was released late last year.

April 12: American R&B singer Eric Benet is returning to Korea following the November release of his new album “Lost in Time.” Benet has received three Grammy Award nominations in the R&B category and won the Naacp Image Award in 2000 for his duet “Spend My Life With You,” with Canadian R&B and soul singer-songwriter Tamia. The song spent three weeks on the top of Billboard’s Hip-Hop and R&B Songs chart.

The orchestras will perform every night except April 10 and 12.

Tickets range from 10,000 won to 30,000 won. There is a discount for people who purchase multiple tickets - 15 percent off for purchasing three tickets, 20 percent for nine tickets and 30 percent for 18 tickets.

To Sunday: After returning to Korea following a five-year absence, “Aida” is coming to a close.

This story of Ethiopian princess Aida is one of forbidden love. Aida is captured and sold into slavery in Egypt, where Egyptian military commander Radames falls in love with her. As the military commander of Egypt, Radames is not allowed to love a woman from a different country, and he struggles to choose between her and his service to the Pharaoh. To make matters worse, the Pharaoh’s daughter, Amneris, is in love with him. Will Radames chose love or success?

Tomorrow to March 28: The Universal Ballet Company presents a comic version of Miguel Cervantes’ novel “Don Quixote de la Mancha,” the story of an aging gentleman who believes himself to be the character in the books he is reading. A different dancer performs in the lead role on each night.

To March 31: The first Korean-language performance of “Jekyll and Hyde” was in 2004. Since then, this musical has been a favorite with Korean audiences. Jekyll and Hyde is set in London in 1885.

Henry Jekyll is a doctor and scientist who lives with his sick father and decides to devote his life to finding a cure for his mental illness. When he decides to experiment on himself, he starts to become his frightening other half - Hyde. Cho Seung-woo and three other actors alternate in the role of Jekyll.

April 1: It’s not a party. Neither is it strictly an exhibition or theatrical performance.

In Berlin, a Klein Kunst party is an event that alllows anyone to experience art by creating their own works. The goal is to break down barriers between artist and audience.

This is the first such party in Korea. Author Kim Sung-eun and German designer Anna Harlin will guide guests through the process.

Performances are at 8 p.m. on Mondays, Wednesdays, Thursdays and Fridays, and at 3 and 7 p.m. on Sundays and holidays. There are no performances on Tuesdays.

To April 17: This musical tells the story of a lion and tiger coming to earth to punish humans for killing ducks and chickens with influenza. It was created by director and choreographer Oh Tae-suk of the Mokhwa Repertory Company.

Performances are at 8 p.m. from Tuesdays to Thursdays, at 3 and 8 p.m. on Fridays and at 3 p.m. on Saturdays and Sundays. There are no performances on Mondays.

Saturday to April 1: This annual art and music festival presents a collection of performances by international musicians like the British Hilliard Ensemble, Heiner Goebbels’ Music Theater, and winners of the Tongyeong International Music Festival competition.

The festival gets its title, “Moving Dimension,” from “Dimensionen,” a piece by Korean-German composer Isang Yun (1917-1995), who served as the inspiration for the festival. The festival focuses on promoting young Asian composers and is led by artistic director Alexander Liebreich, the primary conductor and artistic director of the Munich Chamber Orchestra.Performance times vary.