Jeju looks to take bigger bite out of MICE market

Jeju looks to take bigger bite out of MICE market 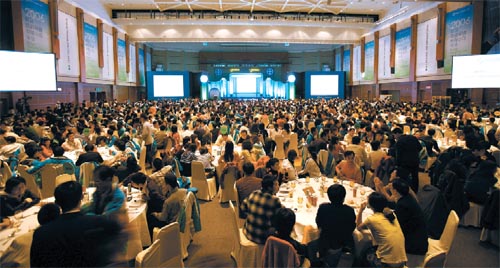 
JEJU - Last Friday, 100 delegates convened at the International Convention Center Jeju to develop ways to spur the convention industry on the island.

The MICE Network Workshop was attended by Lee Charm, president of the Korea Tourism Organization, and Choung Byung-gug, minister of culture, sports and tourism.

The meetings, incentives, conventions and exhibition industry has exploded in the last few years, although statistics vary because hotels are reluctant to report events and the definition of convention is not standardized.

The economic benefits of the fast-growing industry are significant. According to the organization LeaDER, who made a presentation on Friday, one foreign participant at a MICE event generates 2.2 million won ($1,964) in economic benefits. It said a conference attended by 1,000 people carries the same economic weight as exporting 300 vehicles.

“As we discuss more details of the MICE industry, the local MICE industry on Jeju will continue to grow,” said Lee. 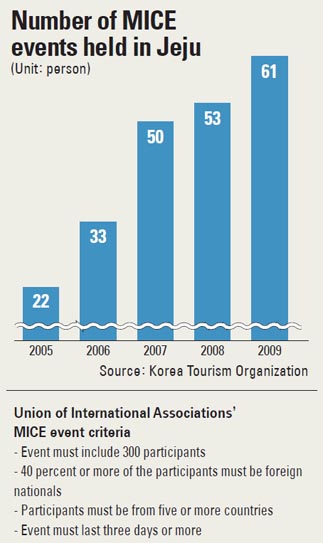 Jeju, and Korea as a whole, has been making efforts to tap into the international MICE market, which almost doubled in Asia from 2005 to 2009, increasing 98.8 percent.

To help attract international conventions, the Jeju Special Self-governing Province opened the International Convention Center Jeju in 2003. It is the largest conference hall in the country, with a capacity of 4,000.

“Jeju started bolstering its MICE industry about 10 years ago when its ‘honeymoon destination’ brand was threatened by rising foreign travel,” said director Ryu Young-shin of Nuri Communications, an agency specializing in conference consulting on Jeju.

Said Ryu: “It was tough for Jeju when in 2008 other domestic cities jumped into the MICE market. But Jeju maintains competitiveness because of its beautiful natural environment.”