Looking for signs of life in no-man’s land

Looking for signs of life in no-man’s land 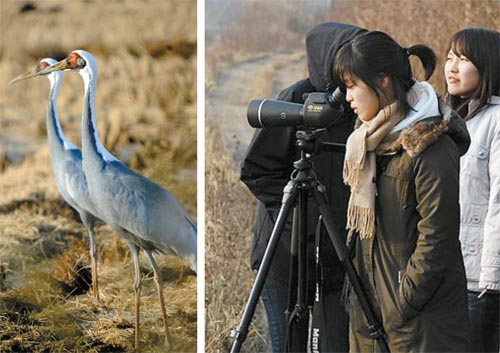 A member of an eco-explorer team gazes into a camera as she studies birds and wildlife in the Demilitarized Zone (DMZ). Since the Korean War ended in 1953, the lack of civilian activity has allowed nature to flourish. By Kim Min-joo


The 20 students are not concerned about the heavily armed soldiers, the barbed-wire fences and the thousands of land mines buried all around. They are looking for a crane, which is an endangered species in Korea except for the Demilitarized Zone (DMZ).

Eighty-one cranes have been counted in the DMZ, and the young eco-explorers are on a mission to help study them as part of trying to protect them.

“The DMZ, although covering only 0.73 percent of our nation, is significant to us because it is home to more than 60 percent of all wildlife species in Korea,” said Keum A-young, a third-grader at the Yongin Foreign Language High School, who has been a member of the DMZ Youth Eco-Explorers Team since 2009.

“While adults focus on the fact that most armistice violations have occurred in this small area, we hope that, in the future, the significance of this place is identified by life, not conflict,” she said.

Established in July 2007 by the DMZ Ecology Research Institute, the eco-explorers team has visited the well-preserved forests and wetlands in the border region every month. During each visit, the teenagers observe and record activity in the habitat by writing and taking photos. And every year, they also hold a DMZ photo exhibit in their schools.

“I founded the DMZ Youth Eco-Explorer Team to implant new values of peace and life about the DMZ to the future generation,” said Kim Seung-ho, head of the DMZ Ecology Research Institute and organizer of the eco-explorers team. “Their experiences in the DMZ let them perceive the Earth’s universal problems and guide them to solutions.”

The institute selects new members for the DMZ youth team every year through its partnership with four high schools in Gyeonggi and Seoul.

To become a member of the DMZ youth team, students have to prove their passion for nature in two rounds of auditions, during which they have interviews carried out by senior members of the team and teachers of the institute and write essays on their ideas about nature conservation. About 12 students are selected annually. After their selection, they are permitted to pass the Civilian Control Line through the auspices of the DMZ Ecology Research Institute.

The DMZ was established by the armistice agreement in 1953, which ended the Korean War with a cease-fire. Both sides agreed to move their troops back 2 kilometers (1.24 miles) from the front line, creating a buffer zone 4 kilometers wide. To restrict access to civilians, the Civilian Control Line was also established up to 20 kilometers south of the DMZ, by the commander of the 8th U.S. Army in February 1954.

Despite the fact that this small portion of the Korean Peninsula was heavily bombarded and damaged during the Korea War, the limitations on civilian activity allowed the environment to rejuvenate by itself within a few decades. Grass and trees have grown up and wild animals began to settle down in the CCL.

Half a dozen students of the team study the area’s ecosystem in-depth as part of a thesis paper. All of the results of their eco-exploration are integrated into a yearbook published at the end of the year and two books have been published so far.

“Our photos of the DMZ shed light on a new aspect of the DMZ. For a long time, the border region was a place of destruction in which sanctity of life was neglected. However, we seek to attach a new value to the DMZ different from that of the older generation; we highlight the value of life here,” said Park Jun-hyun, a third-grader at the Yongin Foreign Language High School who has been a member of the team since 2009.

Apart from touring as an explorer member, one can explore the DMZ’s nature by participating in an eco-tour hosted every month by the DMZ Ecology Research Institute. A bird-watching tour is held during the migratory period, from November to March; wildflower tours are held during the rest of the year. Park said although the public can enter the DMZ right now, entry was prohibited for a few months after North Korea’s shelling of Yeonpyeong Island.

“For a few months after the attack on the island, permission to pass the CCL was not given and thus I was not able to access my research site,” said Park Jun-hyun, 18, a member of the team. “I hope that we end these conflicts in the border region soon and start to cherish its nature,” Park said.

*This article was written with help from staff reporter Kim Hee-jin.