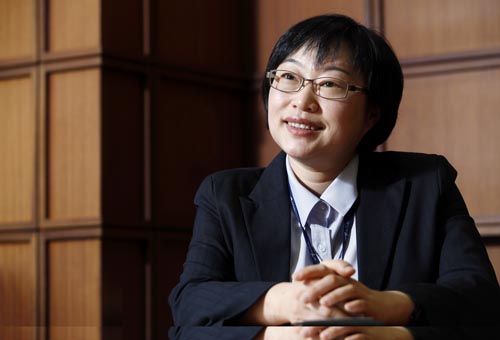 
A kind yet humorous announcement preceded a matinee of the musical “Billy Elliot” at LG Arts Center in late February.

“Children who get overly excited during the performance are advised not to scream or move from their seats because their vigorous expression of pleasure may drive some of their friends to despair,” an announcer said. “Adults, if you are accompanying children, please discourage them from exhibiting their inner talent during the musical.”

The friendly voice was that of Lee Seon-ok, the arts center’s house manager.

“There are a lot of children in the audience for ‘Billy Elliot’ because it is a story about kids,” she said in an interview while the musical was underway. “But usually a teacher will accompany an elementary school class consisting of dozens of students and we know it is impossible for one adult to control them. So I inevitably had to make more extensive comments.”

In her 11 years as house manager, she has made it a rule to do the preperformance announcements live and has never made the same comments twice.

Her announcements differ according to performance, artist and audience. To prepare, she reads play scripts in advance on center stage and studies others in her free time to enrich her commentary.

The humor in her remarks has also given her a following among the center’s regular patrons and members of DC Inside, one of the largest Web-gallery and photography-information sites in Korea. The group even made a list of her quotations from the performances she has presided over.

As the arts center’s house manager, Lee said this is one of the most enjoyable parts of her job. But aside from her role as announcer, Lee and her 25 staff members, who include a group of part-time ushers, do what many audiences don’t even notice - manage the facility.

“Let’s say that the director of any given production is in charge of affairs behind the curtain. The house manager covers everything in front of it. I manage the box office, audience seating, snack bar, parking and so forth. My responsibilities are too numerous to count.”

If she does her job well, most audiences won’t even notice what she’s done, and it would be hard to enjoy a performance without her.

She usually doesn’t have weekends off because there are almost always performances on Saturdays and Sundays. Sometimes she works for nearly a full month without a break.

“When you are engaged in the performance industry, you work when others play,” she said. “But I have no regrets because I love the theater so much.”

Lee joined LG when the private art hall opened in 2000. But her career path was not always straightforward.

Initially an aspiring theater producer, she worked as an intern at Seoul Arts Center for a year and a half beginning in 1994, after graduating from college. But she failed to get formally employed by the state-run art center and jumped from one entertainment agency to another, at times working on production crews for television dramas.

Then the 1997 Asian financial crisis hit.

When her Seoul employer’s financial situation deteriorated, she quit her job and went back to her hometown of Busan and landed a job there. While there, she received a phone call from her former boss at Seoul Arts Center, who offered her the house manager position at the new performing arts center because she showed passion for the arts while working there.

As much as she loves her job, Lee had a lot to talk about when describing her experiences with ill-mannered audience members.

Her list of annoying audience habits includes people who put gum under their seat, those who take photos or shoot video during a performance (which is prohibited by copyright laws), and those who are brazen enough to let their phones continue to ring for fear of being singled out for blame.

But the audience members she finds the most difficult to deal with are mothers accompanying preschoolers.

Although the majority of performances prohibit admission of children aged 6 or younger, some mothers try to skirt this rule by lying about the age of their child.

Even if the mother is successful and she and her child are allowed in, most of the kids end up crying in the middle of the show and getting expelled, serving as a huge distraction to the audience and performers, she said.

Other mothers buy a ticket and insist on watching a performance with their kid on their lap - an act LG Art Center strictly forbids.

“It is true that the attitude of Korean audiences has improved to a large degree,” she said. “But I still see so many audience members with such bad etiquette. In a way, people seem to be getting increasingly selfish because they don’t seem to care if their behavior will hurt others’ feelings.

“It would be very nice if the [Ministry of Culture, Sports and Tourism] could take the lead in launching a nationwide campaign on audience etiquette. Or it could start with just one school class.”