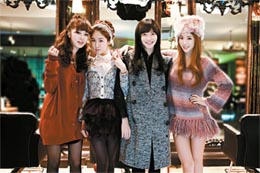 Based on the Korean novel “My Black Mini Dress” by Kim Min-Seo published in 2009, this movie tells the story of four 24-year-old women dealing with a transitional phase in their lives.

Yu-mi (Yoon Eun-hye), Hye-ji (Park Han-byul), Soo-jin (Cha Ye-ryeon) and Min-hee (Yoo In-na) are best friends, each with a different personality and style. Yu-mi has a penchant for luxurious things, Hye-ji is an entertainer, Soo-jin is known for her honesty and Min-hee is known for being unreasonable.

The four are determined to lead successful lives but their friendship is put to the test when one of them is singled out for fame and they must all deal with the consequences of this new reality.

Directed by filmmaker Heo In-moo, mainly known for directing “Herb” in 2006, the film is expected to resonated with women in their 20s who are struggling with some of the same challenges.

Many people wonder where we go when we die. This film tries to provide an answer, presenting a vision for what heaven might be like that, while touching, is somewhat reminiscent of the U.S. film “Bruce Almighty” (2003).

The film follows four people who meet in a hospital: Ji-wook (Kim Dong-wook), a cab driver who is caring for a grandparent with Alzheimer’s Disease, Mi-mi (Kim Ji-won), who is searching for a bone marrow donor for her dying mother, and Min-gyu (Kim Soo-ro), a lawyer mourning the loss of his wife.

Directed by Jang Jin, who has explored everything from the political, in “Good Morning President” (2009), to the mafia, in “Righteous Ties” (2006), the film attracted ample attention from critics and audiences even before its release. 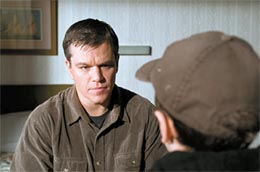 “Hereafter” is a complicated fantasy drama by director Clint Eastwood that focuses on three people who have gone through emotionally draining experiences involving death or the dead.

Marie Lelay (Cecile De France) is a successful television anchor in France and is on assignment in Thailand with her lover. As she shops for souvenirs near the coast, a tsunami washes ashore and swallows her up. Marie dies but rescuers attempt to resuscitate her, and eventually she returns from the afterlife. The entire experience changes her forever.

George (Matt Damon) is a factory worker with psychic abilities. He quit his old job as a psychic because communicating with his clients’ dead loved ones takes an emotional toll. When he finally meets a woman he likes, she asks him to do a reading for her. But when George discovers the woman’s father abused her, she runs away and the two never meet again.

12-year-old London boy Marcus tries to prevent his alcoholic mother from losing him and his twin brother to social services. But one day Marcus’ brother is attacked by a street gang and then hit by a van and killed while trying to escape. Marcus, traumatized, can’t take care of his mom anymore and gets sent to a foster home.

Eventually the three stories intertwine at the London Book Fair, where George meets Marie and Marcus under curious circumstances.

Most reviewers said the story can be meandering and unnecessarily lengthy, but a solid premise and Eastwood’s fine direction make up for many negatives. 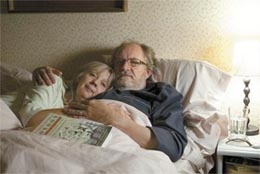 Mike Leigh, the respected British writer and director of film and theater has produced another family drama that seems to be classic Leigh. Spanning a year the film looks at the lives of couple, Tom and Gerri, who are happy to be approaching retirement and even happier to be spending it together. The cast create a network of relationships that sees Tom and Gerri dealing with the damaged circle of friends and family they find around them. Starring Jim Broadbent, who has collaborated with Leigh on three previous occasions, Phil Davies and Lesley Manville. Leigh likes to collaborate with the same people and has not changed what has been a winning formula this time, which may be the secret to his success. 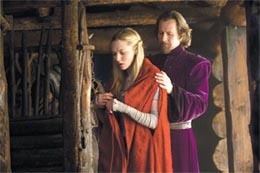 Directed by Catherine Hardwicke, who was at the camera’s helm for the first “Twilight” movie, “Red Riding Hood” shamelessly adopts the tweenage, boy-girl romance plotline. Amanda Seyfried plays Valerie, a pretty girl from the medieval town of Daggerhorn. Every full moon, a werewolf (a la “Twilight”) terrorizes the village. Whereas the mean bad wolf was once content with the animal sacrifices provided by the villagers, the beast now wants to dine on human flesh. And so the werewolf does, killing Valerie’s sister. But never mind the tragedy, because Valerie can’t decide if she likes Peter, a poor woodcutter played by Shiloh Fernandez, or Henry, a wealthy blacksmith played by Max Irons.

When a film is described in terms of franchises you know it is never going to be a classic. The third, and hopefully final, installment of the “Meet The Parents” (2001) franchise, sees pretty much everything that was contained in the first two installments. The same cast do the same things with the same jokes with the exception of Robert De Niro’s character, who gets his erect penis stabbed by Ben Stiller’s character, humourously called Gaylord Focker, while a little Focker looks on. If you liked the first two in the series you will like this one. If you are not a fan of flogging dead horses you probably won’t.

The winner of this year’s Academy Award for Best Picture, “The King’s Speech” is an epic historical drama of King George VI’s struggle to overcome a lifelong speech impediment in the run-up to World War II. King George VI - who finds himself king when his older brother, Edward VIII, abdicates the throne - is played by Colin Firth, who won Best Actor for the role. King George’s wife, Queen Elizabeth and the future Queen Mother, is played by Helena Bonham Carter. It is Queen Elizabeth who finds Lionel Logue (Geoffrey Rush), an eccentric speech therapist whose unusual methods and relationship with the king create the drama and the comedy that make the film into such a masterful telling of a true, but relatively unknown, story. “The King’s Speech,” which received 12 Academy Award nominations, is directed by Tom Hooper, who won Best Director. The film also won Best Original Screenplay.