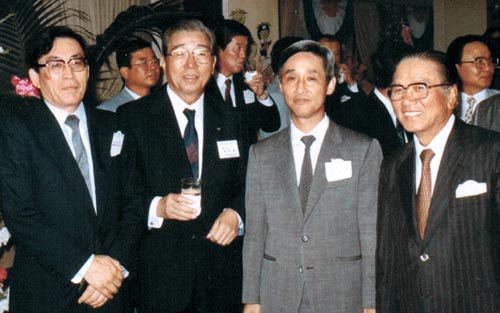 The late Lee Heui-keon, second from left, at the third anniversary of the founding of Shinhan Bank in 1985. [JoongAng Ilbo]


Lee Heui-keon, the former honorary chairman of Shinhan Financial Group, passed away at the age of 94 on Monday.

Lee was a significant figure in the Korean and Japanese financial communities as he helped establish a foundation for Korean finance in Japan. Lee was also a leader in the Korean community in Japan and a civilian diplomat who promoted ties between the two countries.

Lee was born in Gyeongsan County, North Gyeongsang. He first traveled to Japan in 1932 at the age of 15 where he did hard labor during the day and studied after dark. His efforts paid off when he was admitted to Japan’s prestigious Meiji University. He later worked selling bicycle tires illegally in the markets of Osaka.

Lee showed a knack for leadership at an early age. In his early 30s, he became chairman of a Korean-Japanese organization for small store owners that sought to protect the rights of Korean-Japanese in Osaka.

In 1977, Lee founded Cheil Investment Finance in Korea. The financial company’s mission was to provide support to Korean-Japanese wanting to start businesses in Korea.

Lee’s next post was as head of Shinhan Bank, which was launched with an investment from 340 Korean-Japanese in July 1982.

But Lee was more than a banker. He held various positions in different financial organizations, including Korea-Japanese merchant associations, and was often at the forefront of campaigns by Korean-Japanese to provide assistance to Korea.

Lee’s death was announced by incoming SFG Chairman Han Dong-woo on Wednesday during the financial institution’s shareholders’ meeting. The late chairman requested that his death not be announced until the meeting’s end.

The funeral was open only to his family, at the late chairman’s request.