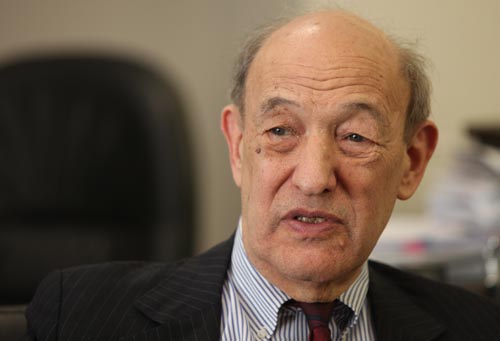 
Ezra Vogel, a professor emeritus at Harvard University, made his name as a Japan expert, publishing books such as “Japan as Number One” in 1979 and “Is Japan Still Number One?” in 2000.

But the 80-year-old scholar has an interest in the whole East Asian region, as demonstrated by two new books he will see published this year.

The books are about the former leaders of Korea and China, Park Chung Hee and Deng Xiaoping, both of whom he says successfully - but not without controversy - brought about the modernization of their countries.

The first book “The Park Chung Hee Era” co-authored by Vogel and 22 other scholars including Kim Byung-kook, the chairman of the Korea Foundation, will be published by Harvard University Press next month.

“What we felt is that Park Chung Hee did an extraordinary job in modernizing Korea,” Vogel told reporters during his trip to Seoul earlier this month. “But he was cruel. He used the KCIA [Korean Central Intelligence Agency] and he was very tough on intellectuals.”

The 18-year-long rule of the former general coincides with the time when Korea, still fresh from the ruins of the painful 1950-53 Korean War, saw a stunningly fast, well-organized period of economic development in the 1960s and the 1970s that came to be known as the “Miracle on the Han.”

At the same time, the country bore witness to a fierce democratization movement against Park’s iron-fisted policies. Park was assassinated in October 1979 by then-KCIA chief Kim Jae-kyu.

“Since I was first here in 1965, I remember all my academic friends, how much they hated Park Chung Hee and the horrible things he did,” Vogel said during a forum held prior to a meeting with the media.

“But I think the job of a scholar is to try describing objectively what we know of, and we have been trying to put together a more objective, comprehensive account of the history to coordinate understanding of the advantages and disadvantages [of the Park era].”

Deng, who ruled China between 1978 and 1992, is the subject of another book that Vogel wrote that will be published this October.

In the book, he presents Deng as the person who opened China to the outside world, laying the foundation for China’s rapid elevation to its current status as a member of the G-2.

Compared to Park, Deng tried to use people from a broader political spectrum and worked to reduce resistance from his opponents in modernizing China, Vogel said.

Vogel said Deng had a serious flaw in his policies, though, which was that under his leadership, politicians were given too much freedom. That in turn created rampant corruption in Chinese society, he said.

Vogel observed that Deng was in control of the military, unlike today’s leadership, which lacks control over its military, as evidenced by the increase in China’s military posturing over the past year. He said that this will continue to be an issue for the current Chinese leadership.

During the interview, Vogel also touched on the effects the March 11 earthquake in Japan will have on East Asia. Tragic as the disaster is, Japanese society will remain strong, he said.

He also said that Korea’s help with relief efforts in Japan could work toward improving relations between the two countries.

“From what I understand, Korea is very fast and very generous in trying to help the earthquake [relief], so I would expect that would be a big help for Japan and Korea to keep relations,” he said.

He said that the earthquake could also create some sympathy for Japan among the Chinese.