In Buam-dong, a test of tourism service

In Buam-dong, a test of tourism service

When traveling around a new country, or even new parts of your own country, it is often necessary to ask people for advice and help. Simple and accurate directions from a local can make or break a trip, and a piece of sage advice about places you won’t find in any guide book often turn out to be highlights.

There is one place on any trip that is often overlooked that can be a gold mine of practical advice and lifesaving information - the local tourism organization. Never has this been truer than in countries where English is not the local language. Korea has a very good tourism organization and both the Web site and call center offer visitors a real wealth of information, from the location of traditional and historic sites right up to where the best places to get duty free items are.

For most visitors to Korea, the Korea Tourism Organization Web site and call center are perfectly adequate when trudging around the country’s tourist hot spots. But how well does the KTO stand up to a real test of its information-providing prowess?

Buam-dong in northern Seoul is a little-known neighbourhood, but that is one of the gems of living in a city with 10 million people; there are nooks and crannies that are home to all manner of quirky and interesting things to see and do.

Situated at the northern end of Gyeongbok Palace, Buam-dong is home to several interesting sites that are well worth a visit, and a recent trip the neighborhood also served as a real test of the information-gathering skills at 1330, the KTO’s travel hotline.

The first hurdle is to actually get to Buam-dong. A quick call to the often magical 1330 and a simple request to one of the tourism elves that live on the other end of the line told me that from Gyeongbokgung Station on subway line No. 3 I could take the No. 7012 or 7016 bus to Buam-dong and that it would take around 10 minutes. Simple. Of course slight difficulties arose when I needed to find out exactly where the bus stop was.

This is where you need to realize that the folks at the KTO (like any other tourism organization) are not tourism deities. You will need to use a little bit of your own mental agility, and possibly a compass, to work out which side of the road to be on, but with detailed maps at their disposal it is possible for the KTO to give you fairly specific directions.

The bus arrived but then I needed to work out where to get off. Another call to 1330 and the operator thankfully offered to speak to the bus driver.

There are a few reasons to go to Buam-dong, between Inwang and Bugak mountains, and chief among them is to walk around the remains of the old city wall.

Originally encircling the city, the wall, or what remains of it, has long been outgrown by the huge metropolis that Seoul has become. Buam-dong is home to one of the gates that is still standing, Changuimun, which is sometimes referred to as Jahamun. Gone are the days when the opening and closing of the gates would be accompanied by chiming bells, but in a nod to the gate’s proximity to the Blue House and to Seoul’s proximity to North Korea there are instead camouflaged and armed soldiers standing sentry. This proximity to the seat of power also means that you will need an ID if you want to access the part of the wall that passes closest to the Blue House.

Another call to 1330 sent me on a taxi trip to Seokparang, a pricey restaurant not far from Changuimun. Historically, Seokparang is something of a red herring because it borrows its name from the pen name of Heungseon Daewongun, the father of Emperor Gojong. According to the KTO Web site, the restaurant has been certified by the Seoul government as a “Best Korean Restaurant.”

The historical link is tenuous at best and stems from the purchase of an annex from the Daewongun’s residence, Seokpajeong. Originally Seokpajeong, or “Stone Pass Pavilion,” was a retreat kept by Kim Heung-geun, a high-ranking court official. But legend has it that the Daewongun took the young Gojong on a visit there, which instantly meant that the property was not suitable for lay people and was compulsorily purchased. The pavilion is not currently accessible because construction is underway for a Seokpa cultural center and access is blocked until construction is compete in May. Sadly, this information wasn’t offered by the 1330 service.

History and walking, especially walking on history, can be tiring and so a retreat to a famous coffee shop in the area was called for. Exterior shots from the Korean drama “The 1st Shop of Coffee Prince” was shot at Buam-dong’s Art for Life cafe and draws crowds of tourists, particularly on weekends.

Another call to 1330 caused some initial confusion because there is a cafe in the Hongdae area that provided the backdrop for interior shots, but after explaining that it was the Buam-dong location I was looking for, I was back on track. An over-priced latte later and 1330 had passed this test with flying colors.

The KTO has a valuable service that they have placed at the disposal of tourists, and even though there are drawbacks, it does what it promises to do. They were always happy to speak to taxi drivers, a welcome intervention. However, this service cannot do everything for you. You have to be pragmatic and use it sparingly. Get a map and do some research before setting out. Know where you are going and have at least a vague idea of how to get there. The 1330 hotline will do what it can for you but it can’t hold your hand all the way. 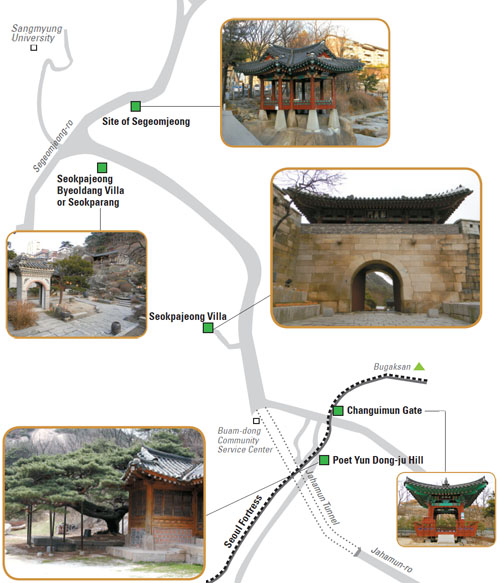 Segeomjeong
Scholars and artists came to this scenic mountain pavilion to gain inspiration for their work. It was also used by 16th century generals, who dipped their swords into a nearby stream to conclude their meetings with Prince Gwanghaegun.

Seokparang
An annex of the residence of the Heungseon Daewongun, the father of Emperor Gojong, is now the site of an upscale Korean restaurant. The annex was moved to its current location in northern Seoul by Son Jae-hyeong in 1958.

Changuimun
This gate is one of four gates along Seoul’s old city wall. It is often called Jahamun after the name of the nearby valley.

Poet Yun Dong-ju Hill
This pavilion, and the hill on which it sits, commemorate the work of renowned poet Yun Dong-ju (1917-1945), who used to walk along the road leading to the pavilion to gain inspiration for his work. Provided by Korea Tourism Organization