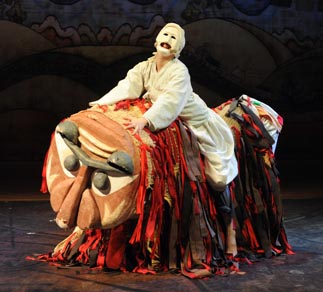 Director Oh Tae-suk of the Mokhwa Repertory Company has played a leading role in transforming traditional performance into modern theater. In his newest work, “Bukcheong Lion Dance,” he blends mask-dance styles from different regions of Korea. The show runs through April 17 at Seoul Namsan Gugakdang.

The show follows a young lion named Geum-hwa, who watches the human world from her mountaintop home. When she sees someone with a pair of flower shoes, she decides that she has to have a pair and transforms herself into a human so she can buy a pair. When she gets to the market, she sees a group of street performers dressed up as lions doing a lion dance. Excited, she playfully grabs the hair of Gi-seok, a dancer wearing a lion costume. Gi-seok likes her dancing so much that he wants her to join the troupe, but when the performance ends, Geum-hwa is nowhere to be found. When Gi-seok finally finds her, the two fall in love. Meanwhile, the emperor of heaven has found out that Geum-hwa changed herself into a human and sets out to punish her.

To provide the audience with a deeper understanding of these traditional dance styles, there are post-performance discussions with Oh and the actors every Friday after the 3 p.m. matinee. After the Saturday and Sunday shows, the performers will give a short demonstration in the yard in front of the theater.