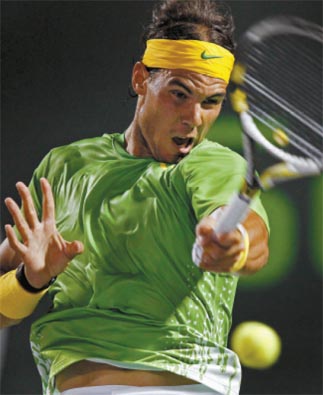 MIAMI - Top seeds Rafael Nadal and Caroline Wozniacki lived up to expectations as both advanced with ease at the $9 million Miami WTA and ATP Masters tournament on Saturday.

World No. 1 Nadal has yet to win a Miami title, finishing second in 2005 to Roger Federer and three years later to Nikolay Davydenko. His win over Nishikori followed one at Wimbledon last year.

“I’m very happy about how I played today - I was at a high level tonight,” the Spaniard said.

“The feeling was better than last week, so that’s important. The serve worked very well at the end of the match,” Nadal added.

World No. 3 Federer notched another match win and another career milestone through a 6-3, 6-3 win over Radek Stepanek to reach the third round.

But there was no joy for American Andy Roddick, who became the second Miami title holder in as many years to exit in an opening match.

“I had a little trouble breathing out there today,” said Roddick, who will drop from the top 10 in the next rankings. “I’ve had something for a little while, but I’m going to have it checked out when I get home.

“I didn’t feel good all day. I’ve had it dating back to Memphis off and on. That’s a little too long, I think.”

Roddick played the Davis Cup at the start of the month in Chile, then failed to make the quarterfinals at the Masters 1000 event at Indian Wells.

He was treated on court on Saturday for both his illness and a groin problem.

Cuevas, ranked 67th in the world, had never played Roddick before and made the most of his first chance.

In the third round he will face Frenchman Gilles Simon, who beat German Rainer Schuettler 6-4, 6-3.

Federer, whose 16 grand slam titles are the most in history, joined Pete Sampras at seventh on the all-time win list with 762 career victories. Jimmy Connors sets the pace in that statistic with 1,242.

“It’s nice tying Pete, but he could have played for many more years,” said Federer. “He could still win some matches on tour now if he wanted to.

“It’s a funny stat, but it shows how long I have been around already, how much I’ve won, all around the world and all the different surfaces. I’ve played 10, 12 solid seasons, you know.”